During last week’s appeal hearing against the Named Person law, the Scottish Government’s QC told the court that if a young girl was in hospital and discovered to be pregnant then the Named Person would definitely be contacted…but didn’t seem to know whether the parents would be informed.

Alistair Clark QC, representing the Scottish Government, was meant to be defending the scheme but instead managed to present a convincing case as to why the Named Person would be damaging for families.

Clark’s comments regarding teenage pregnancy reveal one of the major flaws with the Named Person scheme – it would bypass parents.

As we reported earlier in the week Clark also told judges during the hearing that the scheme was needed because every child in Scotland was deemed to be “potentially vulnerable”.

This greatly undermines ordinary Scottish families and is chilling stuff from the Scottish Government’s QC.

Any Government scheme which puts parents in second place after the state in relation to their own children is flawed from the outset.

Aidan O’Neill QC, representing those bringing the legal challenge, said the Named Person would be “a state functionary who has the power to interfere in the lives of every child in Scotland and in family life…the power to come between the child and their parents”.

He added that the Named Person’s powers to obtain and share confidential data on families without consent or veto constituted further interference.

The judges are currently considering their verdict, which is expected to take several weeks.

The Named Person provisions are contained in the Children and Young People (Scotland) Act, which was passed by the Scottish Parliament last year. The scheme is due to be rolled out across Scotland in 2016. Some areas of Scotland already have a non-statutory Named Person pilot scheme in operation but they do not have the full range of legal powers contained in the Act.

Last week’s appeal hearing rehearsed many concerning reasons why the Named Person scheme is not compatible with a free and democratic society, but perhaps the most revealing and worrying comment came from the Scottish Government’s QC.

Pressed by Lord Malcolm on why every child needed to have a Named Person, when not all of them were at risk, Alistair Clark QC, representing the Scottish Government, stated that every child was deemed to be “potentially vulnerable”.

Mr Clark’s words expose the thinking behind these intrusive plans.

A NO2NP spokesman said: “The assumption that all Scottish children are potentially vulnerable is patronising to all ordinary parents trying to do their best to bring up their children.

“The Scottish Government is saying to normal mums and dads that they all need the state to be a co-parent to stop them leaving their child potentially vulnerable.

“This unwarranted intrusion into family life is undermining and unnecessary.”

During the appeal hearing last week Aidan O’Neill QC, representing those bringing the legal challenge against the Named Person, addressed conflict between respect for the family and responsibility for the protection of children from harm.

He said there was no pressing social need requiring interference in the lives of every family and said: “The overwhelming majority of children are not neglected and the Named Person scheme subverts family life and supplants parents.”

“Most families do not need the state to get involved. Some parents – a tiny minority – do cause harm to their children but that does not justify appointing a named person to every child.”

Mr O’Neill pointed out that the Named Person scheme had been drawn up to promote children’s ‘wellbeing’ – a concept which, according to the Government, can include everything from mental health to a “wider vision of happiness”. He responded, “That’s what parents do and have done through the ages. It’s not the state’s job.

Mr O’Neill raised the concern that the central assumption behind the scheme is that “the state knows best”.

‘THIS IS WORSE THAN THE NANNY STATE’, QC TELLS COURT ON DAY 1 OF APPEAL

Yesterday, Aidan O’Neill QC, representing campaigners challenging the Named Person scheme, told Scotland’s highest court that the plan to give every child in Scotland a state guardian was “incompatible with the fundamental rights of a democratic society”.

O’Neill, a leading human rights expert, said the scheme created a situation “worse than a nanny state because the nanny is at least responsible to the family”.

He was speaking at the start of the appeal hearing by opponents of the Named Person legislation, after Lord Pentland rejected their initial bid last year.

During the appeal, in Edinburgh’s Court of Session, Mr O’Neill said the state should support the family in the upbringing of children as the family is the fundamental group unit of the state and entitled to state protection.

He said the Universal Declaration of Human Rights was written to counter Nazi and Fascist totalitarian states which placed value on “uniformity and conformity” and to point out that “the child is not the mere creature of the state”.

He told the court the scheme didn’t require families to give consent and offered no chance to opt in or out and said: “The presumption is every child needs a named person. That is wrong. The vast majority of parents bring up their children perfectly well. For the state to assume a responsibility for every child regardless of need or threat of harm is to go beyond what we properly expect from a democratic society that respects families and respects diversity.”

Based on the guidance issued by the Scottish Government he also drew attention to the fact that: “Not only can you not opt out of the scheme you have to positively co-operate with the named person otherwise you could be characterised as ‘hostile’ or ‘non-engaging’ which leads to further state involvement. ”

He said the compulsory nature of the law and the need to collate data on every child would result in “white noise” meaning “those who do need help get lost”.

Mr O’Neill recognised that there are conflicting issues between respect for the family and responsibility for the protection of children from harm. But he said there was no pressing social need requiring interference in the lives of every family and continued: “The overwhelming majority of children are not neglected and the Named Person scheme subverts family life and supplants parents.”

He said the scheme was drawn up to promote ‘wellbeing’ (which can include everything from mental health to a “wider vision of happiness”) among children but said: “That’s what parents do and have done through the ages. It’s not the state’s job.

“Most families do not need the state to get involved. Some parents – a tiny minority – do cause harm to their children but that does not justify appointing a named person to every child.”

He said the central assumption behind the scheme is that “the state knows best” whereas families “are the breeding ground of diversity and individuality”.

The legal action is being brought by The Christian Institute, CARE, TYMES Trust and the Family Education Trust, with the support of academics and individual parents, all of which support the NO2NP campaign.

The Named Person scheme is part of the Children and Young People (Scotland) Act and is expected to be implemented nationwide in 2016.

On Saturday NO2NP officially launched its online petition to oppose the Scottish Government’s Named Person scheme. Volunteers took to the streets of Dundee to help raise awareness of the campaign by giving out leaflets to the public and gathering signatures for the petition.

A team of volunteers were also out in Kirkintilloch, the constituency of the Minister for Children and Young People.

The petition doubled in size over the launch weekend, and now has more than 4,500 signatures. Sign and share the petition here. 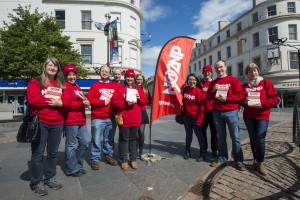 The Action Day and petition launch comes ahead of the appeal hearing by campaigners opposing the Named Person scheme, due to be heard in the Court of Session this Wednesday and Thursday.

A spokesman for NO2NP said: “We remain deeply concerned about the threats to the human rights of families to their privacy in their own homes as well as the breaches of data protection laws as the state passes confidential family information to and from different public bodies.

“The state thinks the named person – a health visitor, a teacher or other professional – can fulfil the role better than mums and dads which is ridiculous.

“It’s vitally important that the higher courts consider this issue, because it’s driving a coach and horses through parents’ rights and private family life.” 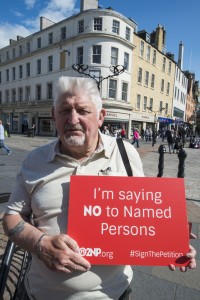 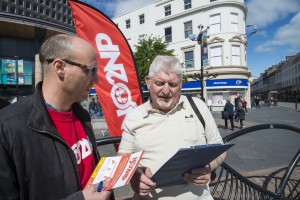 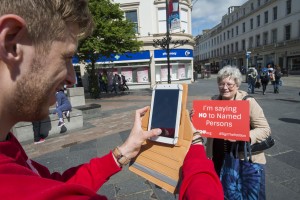 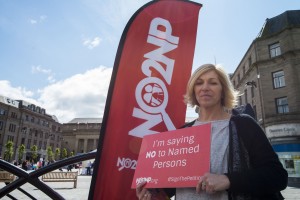 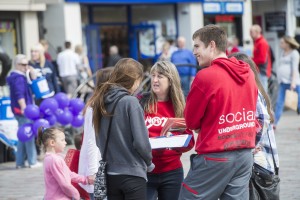 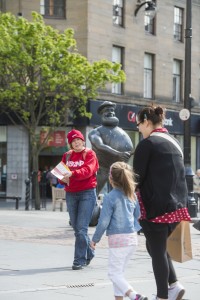 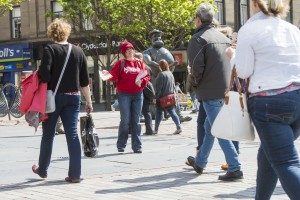 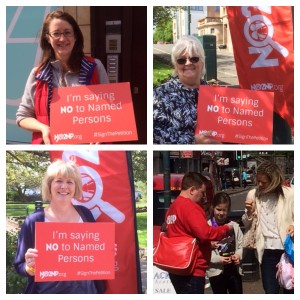 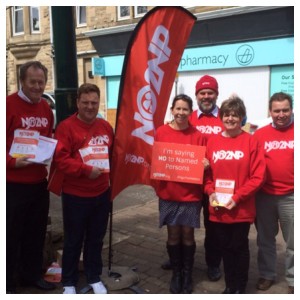 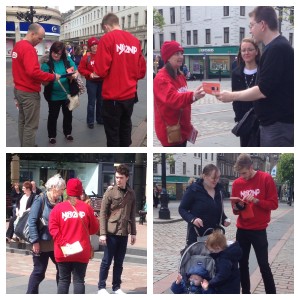 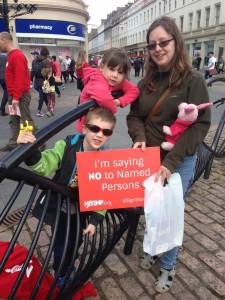 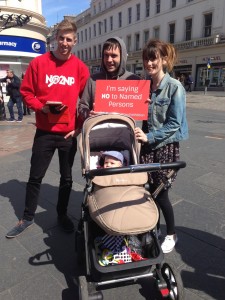 Legal papers challenging the Scottish Government’s Named Person plans were lodged at Edinburgh’s Court of Session yesterday. There is widespread opposition to the proposals and concerned parents and other groups turned up to help deliver the documents under the spotlight of the media.

Here is a round up of the news reports.

Dangerous move by the state
The Press and Journal

Challenge to guardian law in court
The Courier & Advertiser