The campaign saw strong support in Elgin last night as concerned parents and individuals, with some traveling quite a distance, turned out for the latest NO2NP Roadshow.

Nigel Kenny of The Christian Institute explained that the campaign was made up of a broad coalition of organisations and individuals from academia, charities, education, medicine, politics and social work. He said all those involved have a shared concern for the importance and autonomy of the family in raising the next generation.

Lesley Scott from Tymes Trust then spoke about the blueprint for every child’s life that has been planned under the GIRFEC (Getting It Right For Every Child) model, including the Wellbeing Wheel, the My World Triangle and the Resilience Matrix. She pointed out that Edinburgh University had identified no fewer than 304 outcomes that could arise from the SHANARRI “wellbeing” indicators.

Nigel finished off the talks with an update on the judicial review appeal (due to be heard in Edinburgh on 3rd and 4th June) and some tips on how people can get involved with the campaign.

There was a lively and extended Q&A at the end, where people expressed their deep concerns about the negative impact that the scheme will have on families, schools and society at large.

The NO2NP Roadshow will be stopping off at Falkirk next on Wednesday 27th May, when we’ll be at the Best Western Park Hotel in Camelon Road at 7.30pm. Hope to see you there if you live in and around the area! 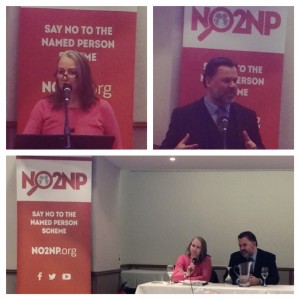