Swinney leaves NO2NP’s campaign spokesman out in the cold 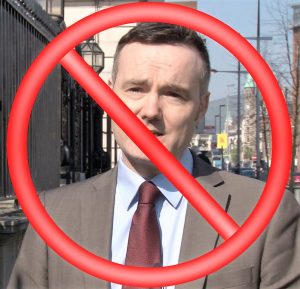 The Deputy First Minister and Education Secretary John Swinney put a ban on NO2NP’s campaign spokesman Simon Calvert from attending a meeting of third sector groups to discuss the future of the Named Person scheme.

The talks were held as part of an “engagement process” session in Edinburgh on 1 December, to discuss possible ways of changing the scheme following the Supreme Court defeat earlier this year.

But The Christian Institute, a lead party in the legal case, and which helped spearhead the formation of NO2NP, was told its presence would not be welcome at the meeting.

The brush off was contained in an email from a Scottish Government official which stated:

“The aim of the engagement process is to adequately, properly and fully address the issues that were raised in the Supreme Court judgment, and we are engaging widely on those questions.

“However we are not discussing the principle of the Named Person policy as the Supreme Court found it to be legitimate and benign.

“Your organisation has made it clear that it is against the provision of Named Persons, so there is a fundamental policy disagreement.

“The Scottish Government are engaging with people who wish to improve the legislation not those who wish to revisit a debate on its establishment as this has been agreed by Parliament.

“If you would however like to provide your views on the issues raised by the Supreme Court judgment, I attach the engagement discussion paper for your comment.”

Simon Calvert of The Christian Institute, who has been a regular spokesman for NO2NP, said:

“The Government doesn’t seem to realise you can have a principled disagreement on an issue and still be capable of making a worthwhile contribution to the debate. That’s the way politics works. It seems rather petty to exclude us like this.

“But this is typical of the ‘intense engagement’ period which Mr Swinney announced in September after losing the court case. They really are only interested in creating an echo chamber for their own views. This so-called consultation is virtually worthless.

“Polls show that only 24% of the population think every child should have a Named Person. By refusing to speak to anyone representing the overwhelming majority who don’t back their policy, the Government is closing the door on advice which could help them to avoid more catastrophic blunders. They are making the same mistake they’ve been making all along: they think they know best.

“More than 36,000 people of all walks of life and political persuasions have signed the NO2NP petition – so Mr Swinney is snubbing them as well as us.”