The Arran Suite at the Holiday Inn, East Kilbride, was filled to capacity for the latest NO2NP Roadshow event before the summer break.

Community paediatrician Dr Jenny Cunningham told those gathered that concerns about the scheme were far more than questioning a different health model or budgeting constraints: it is about scrutinising families and undermining parental autonomy, which is the basis for a democratic society, she said.

She went on to explain that the role of the community paediatrician has been redefined by this legislation. While previously 80% of her work was about various disabilities in children, and only 20% about vulnerable children, now 70-80% of her work has to do with assessing vulnerability through the SHANARRI ‘wellbeing’ indicators.

She finished by saying that she and many of her colleagues were very concerned about the new obligation to share confidential information.

Next up was Lesley Scott of TYMES Trust, who said she had watched a video on South Lanarkshire Council’s website about young children and the importance of good attachment. Yet nothing was said about parents and children or families.

Lesley went on to explain – and display – the 13 pages of “outcome signifiers” to wellbeing that the University of Edinburgh had drawn up. South Lanarkshire Council had also produced 398 pages of guidance for named persons and Lesley queried whether everyone would interpret it the same way. The guidance estimates that 20-30% of children and young people will require additional input from state agencies.

Lesley expressed her concern that there is no facility for parents or children to disagree with the Named Person’s professional assessment of what is “needed” and parents will have no control over the ever-changing standard of parenting to which they will be held.

There was a very lively and extended Q&A, where several people questioned whether Named Persons knew anything about the real world of parenting, especially when some of them may have no children of their own.

The NO2NP Roadshow will be taking a break for a few weeks over the summer, but do watch out for further events we have planned for later in the year!

In the meantime, a big thank you to everyone who has come to these Roadshows – please continue to tell your friends about the campaign and encourage them to sign the petition. 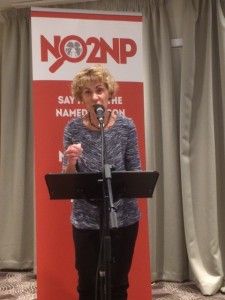 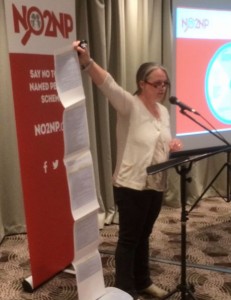