Evidence is stacking up against the Named Person scheme

And it’s not looking good for the Scottish Government.

The proposals have not only been criticised by lawyers, health professionals, teachers and data-sharing experts, but even MSPs have had enough.

MSPs on the Delegated Powers and Law Reform Committee were not satisfied with the answers they got from John Swinney in September. The committee has now recommended that the Scottish Government “revisits its approach to the Code of Practice”, which is central to Named Person practice on the ground.

NO2NP spokesman Simon Calvert commented: “This is a real rebuke for John Swinney. Hidden beneath the bland wording of a Parliamentary press release is the anger of a committee of MSPs denied the opportunity to exercise their constitutional and democratic duty … on behalf of the families of the country they represent.”

Maggie Mellon, giving evidence on behalf of the NO2NP campaign yesterday, told the Education and Skills Committee: “The problem we need to address is: is this about parents or telling people what’s good for them and acting in a way we all think is good for them, rather than listening to what they want?”

She raised concern that there was still a lack of definition for “wellbeing” and commented: “Asking for compulsory intervention on basis of subjective indicators and requiring professionals to interfere is not helpful”.

She asserted: “Are we going to get it right this time?”

Last week DCI Norman Conway, representing Police Scotland, appeared to admit to the Education and Skills Committee that the police had been involved in years of unlawful data sharing. He blamed the ICO guidance from 2013 and said, “we started to believe we were in good grounds to actually actively share wellbeing information regarding children”.

Commenting on the news, NO2NP spokesman Simon Calvert said: “It’s now been publicly confirmed for the first time that for three years the police – and possibly other organisations who relied on the ICO advice – were routinely disclosing the private and confidential information of children and families in an outrageous invasion of privacy and human rights.

“This was all happening before the scheme was fully implemented. Imagine what would have awaited families if the Supreme Court had not come to their defence?”

The evidence is stacking up against the Named Person scheme. When will the Scottish Government will admit it got it wrong for Scottish families and drop these intrusive plans? 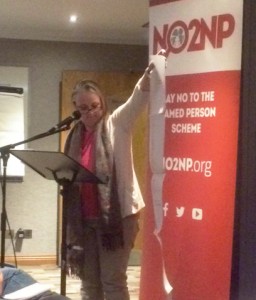