Evidence is stacking up against the Named Person scheme

And it’s not looking good for the Scottish Government.

The proposals have not only been criticised by lawyers, health professionals, teachers and data-sharing experts, but even MSPs have had enough.

MSPs on the Delegated Powers and Law Reform Committee were not satisfied with the answers they got from John Swinney in September. The committee has now recommended that the Scottish Government “revisits its approach to the Code of Practice”, which is central to Named Person practice on the ground.

NO2NP spokesman Simon Calvert commented: “This is a real rebuke for John Swinney. Hidden beneath the bland wording of a Parliamentary press release is the anger of a committee of MSPs denied the opportunity to exercise their constitutional and democratic duty … on behalf of the families of the country they represent.”

Maggie Mellon, giving evidence on behalf of the NO2NP campaign yesterday, told the Education and Skills Committee: “The problem we need to address is: is this about parents or telling people what’s good for them and acting in a way we all think is good for them, rather than listening to what they want?”

She raised concern that there was still a lack of definition for “wellbeing” and commented: “Asking for compulsory intervention on basis of subjective indicators and requiring professionals to interfere is not helpful”.

She asserted: “Are we going to get it right this time?”

Last week DCI Norman Conway, representing Police Scotland, appeared to admit to the Education and Skills Committee that the police had been involved in years of unlawful data sharing. He blamed the ICO guidance from 2013 and said, “we started to believe we were in good grounds to actually actively share wellbeing information regarding children”.

Commenting on the news, NO2NP spokesman Simon Calvert said: “It’s now been publicly confirmed for the first time that for three years the police – and possibly other organisations who relied on the ICO advice – were routinely disclosing the private and confidential information of children and families in an outrageous invasion of privacy and human rights.

“This was all happening before the scheme was fully implemented. Imagine what would have awaited families if the Supreme Court had not come to their defence?”

The evidence is stacking up against the Named Person scheme. When will the Scottish Government will admit it got it wrong for Scottish families and drop these intrusive plans?

Worries about teachers’ workload and anxiety around Named Person liabilities were at the forefront of today’s Education and Skills Committee evidence session. 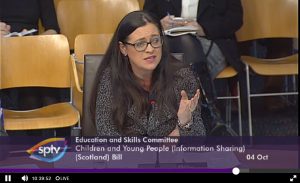 Headteacher and EIS member Lorraine McBride told MSPs that being a headteacher was already a “difficult, difficult job”, and said that adding the Named Person duties “makes everything that bit bigger”. She told the committee that headteachers were worried about being liable if they got it wrong, admitting: “We worry ourselves sick every single day.”

Lisa Finnie of the Scottish Guidance Association, a body which helps teachers involved in the personal support of children and young people, said she felt like they were doing three jobs – teaching, work in the school and the 3am job at home. 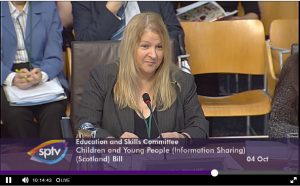 She argued that asking them to take on the Named Person role would be an impossible task. She told the committee: “It’s like asking the checkout girl to go and fill the shelves when she’s got a queue. You can’t do it. It’s impossible to ask people to do it”.

Dr Ken Macdonald, ICO’s Head of Regions, told MSPs that the ICO was never totally satisfied with the Named Person Bill. He said the original Bill did not meet the criteria of the Data Protection Act. 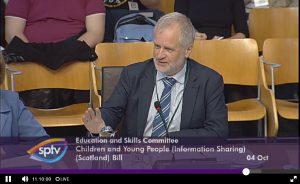 NO2NPers will recall that Dr Macdonald was responsible for the 2013 guidance which gave the green light to Named Person information sharing. He was later forced to withdraw it.

He was also pressed about private emails which emerged after the Named Person Supreme Court ruling in which he expressed his disappointment with the judgment. He did not explain what it was about upholding the fundamental human rights of families that he found so disappointing.

And in another blow for the Scottish Government, Maureen Falconer, ICO’s Scotland Regional Manager, told the committee that the Government’s illustrative code of practice was “not fit for purpose”.

The Education and Skills Committee wrote to Deputy First Minister John Swinney two weeks ago asking for a revised code of practice, but this request was rejected.

Dr Macdonald told MSPs that the code of practice was integral to complying with the Supreme Court ruling and without it the committee would find it difficult to come to a conclusion about whether the revised scheme is adequate.

The Scottish Government’s attempt at fixing the Named Person scheme has received repeated criticism in recent weeks from professionals including lawyers, teachers and social workers, who have been giving evidence to the Education and Skills Committee.

“The Named Person scheme is holed below the water line and rapidly sinking under a tsunami of condemnation from experts and those expected to implement it.

“The Government was humiliated in the UK Supreme Court when judges told them their first proposals were unlawful.

“Now John Swinney’s new Bill, which depends on a code of practice yet to be seen, is floundering badly. The draft code has been attacked on all sides by information watchdogs, teachers, lawyers and health visitors.

“The draft code ‘is not fit for purpose’, according to evidence given to MSPs by Maureen Falconer, the ICO’s Scottish regional manager.

“Yet, Mr Swinney has told MSPs he is refusing to give them sight of a final code before they pass his Bill. This is preposterous arrogance.

“The information watchdogs told MSPs it would be difficult for them to make definitive conclusions about the Bill without seeing the final code.

“Mr Swinney should put up. But perhaps he is too feart in case his proposals are rejected.

“The best alternative is to just rip up the Bill and forget it.”