First Minister Nicola Sturgeon has been accused of sending “mixed messages” in her claim that the Named Person scheme is “not mandatory”.

During an interview with BBC Scotland’s Political Editor Brian Taylor, the First Minister commented on the Named Person scheme, saying: “It’s not compulsory, it’s an entitlement, not an obligation. If the parent doesn’t want to have anything to do with the Named Person scheme they don’t have to… It’s not mandatory.”

There has been a backlash in the press and from the public urging the First Minister to clarify her statement, which contradicts the Government’s own QC, who told the Court of Session that to allow an opt-out would “defeat the purpose of the scheme”.

A NO2NP spokesman told the press: “If the First Minister thinks the Named Person scheme is ‘not mandatory’ then she has been very badly misled by her advisers.”

“When she realises how inaccurate the advice from officials has been I imagine heads will roll. They’ve made her look very silly because she may be the only person in Scotland who doesn’t know that the Named Person scheme contains no opt-outs and no provision for parental consent. It is, on any ordinary understanding of the word, mandatory.

“Given how unpopular the scheme is, it is highly convenient for the First Minister to say it’s not compulsory. Sadly it just doesn’t happen to be true.”

The phrase ‘opt out’ appears absolutely nowhere in the legislation. The concept of parental consent is also entirely absent.

A Named Person will be appointed for every child in Scotland. They will have legal power to obtain your confidential family data without your consent or knowledge. They will have a legal duty to monitor your child’s happiness whether you want them to or not, and power to bring in other agencies to deal with your child without your consent. If that’s not mandatory, what is?

The frightening reality is that refusal to engage with a Named Person could well be treated by the authorities as a red flag leading officials to escalate concerns about a family. This increases the likelihood that child protection powers will be invoked to allow coercive intervention in the life of the family. So telling a Named Person you want to be left alone to take care of your own family could be the very thing they use against you to justify intervention.

If the scheme was voluntary, it would be fine. Parents who want help would know where to go to get it. But the Named Person law is universal – appointing a Named Person, with all their powers, over every child, with no opt-out, no right to confidentiality, and no requirement for parental consent.

Dr Stuart Waiton, a sociologist at Abertay University, called on the First Minister to clarify her statement.

He commented: “Named persons are being trained in a particular way to measure children’s progress and development and it is going to be very difficult for parents to reject their ‘advice’ – many will fear that rejection could count against them.

“By bringing in a kind of parental support agency, and suggesting that there is a ‘rulebook’ for parenting that must be adhered to, the Scottish Government risks undermining the authority of parents.”

NO2NP AT THE SNP CONFERENCE

As delegates approached the Aberdeen Exhibition and Conference Centre last week for the SNP’s Autumn Conference, they were met by a friendly team of NO2NP supporters, handing out leaflets explaining why we are opposed to the Named Person scheme. 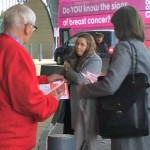 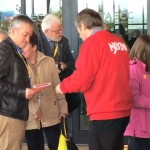 Despite the controversial policy having been pushed through the Scottish Parliament by the SNP last year, large numbers of delegates were happy to take a flyer and consider our arguments.

Surprisingly few indicated support for the scheme and a number expressed strong opposition to it. One delegate commented that the SNP had gone ahead without consulting the party membership on the matter. 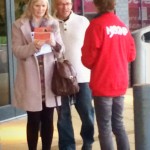 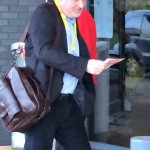 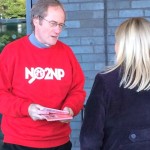 A number of MSPs stopped to speak with our team, including government minister Aileen Campbell, who is responsible for the Named Person policy. She engaged in some good natured banter with our volunteers. Let’s hope she and her colleagues take note of the public concern there is about the legislation within her own party and beyond. People of all political persuasions can see that it is a gross intrusion into family life, unworkable and bad news for truly vulnerable children, who will see stretched resources diverted away from them by the universal nature of the scheme.

Do keep telling your friends to sign the petition to let the government know that more and more people are saying No to Named Persons.