The Scottish Government has thrown a veil of secrecy around stalled efforts to salvage its Named Person scheme after judges declared their original plans illegal.

Education Secretary John Swinney ordered a three month “intense engagement” period after the UK Supreme Court blocked the planned implementation of the scheme from August 31 last year. Officials also stated: “Before the end of 2016, the Deputy First Minister intends to return to Parliament and announce the next steps.”

But two months into 2017 there have still been no updates from the Government. A standard reply letter saying the Minister will return to Parliament “in the new year” is still being issued by officials.

A NO2NP supporter filed a Freedom of Information (FOI) request last month in a bid to secure access to the minutes of these “engagement” meetings since August last year.

Normally such minutes must be made public, but officials blocked their request, exempting the Government from handing over the data “because we intend to publish that information within 12 weeks of the date of your request” (12 January 2017).

The letter responding to the FOI request states:

“We have found that, on balance, the public interest lies in favour of upholding the exemption. We recognise that there is some public interest in release because of the interest in the content of discussions at the meetings, and this will be met by our planned publication. In the meantime, there is a greater public interest in taking the time necessary to ensure the information has been properly collated and checked before it is published as planned.”

Lesley Scott of Tymes Trust, who submitted the FOI request, said: “It would seem that the Scottish Government has learnt nothing over the last 3 years and is determined to repeat the same mistakes that ended up in them losing in the UK Supreme Court last year.

“Not only did they bar anyone who disagrees with the Named Person scheme from taking part in the ‘intense engagement’ in the first place, they are now refusing to even let us know what was said.

“For a Government that claims to value openness, transparency and citizen participation it has fallen far short of its aims yet again.”

“The engagement period was really a sham consultation because Mr Swinney only wanted to deal with those who support the scheme and organisations mainly funded by the Government.

“He refused to engage with us even though we represent an important cross-section of Scottish society, huge numbers of parents and more than 35,000 people who signed our petition. We have led the public discussion on this issue for two years – we even won an award for our campaign – yet he won’t meet with us.

“The three-month ‘engagement’ has long since ended. It looks like it could be more like six or seven months – March or April 2017 – before we hear anything.”

“It just shows how difficult they are finding it to salvage their Named Person plans. The initial Government reaction to the Supreme Court ruling was to pretend we’d lost our challenge – a classic example of spin and denial.

“On the day of the ruling in July they were telling the BBC they hoped to roll out the system before the end of the 2016. By September were talking about an “ambition to work towards August 2017”. Now even that looks optimistic if they are going to bring in a Bill and get it through all its stages in Parliament – and consult on new statutory guidance to go with it – in time for the summer recess.” 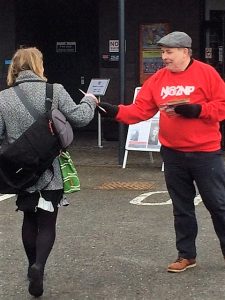 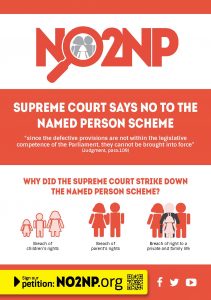 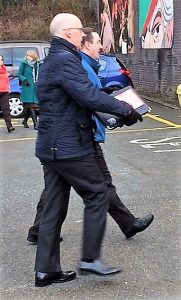 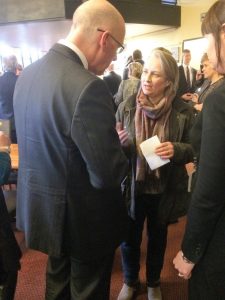