Sociologist and Scotsman columnist Tiffany Jenkin has called for the Named Person scheme to be scrapped.

Writing in a comment piece for the Scotsman over the weekend, she said: “The named person scheme is an unprecedented and damaging intervention into family life that will direct help away from those most in need. It should be scrapped.”

She said: “Lumping parental responsibilities on state agencies will mitigate against children’s interests being served”.

Remarking on the process of childrearing, she said: “Most parents raise their children the same way: according to their own beliefs, hopes and dreams, with all the idiosyncrasies that accompany them, under the pressured, day-to-day realities of their busy lives – but they all do it with love. The nature of domestic life is that it is messy, but even when people get things a little wrong, and that’s not hard, everyone is trying to do their best.”

Jenkins asserted: “What everyone needs is to be allowed to get on with it. To be trusted to do a reasonable job, and not blamed for problems that are nothing, or not much, to do with childrearing.”

But she says this, “it would seem, is impossible”

She explained that, “in the last few decades, the family and the early years of a child’s life have been identified, in political circles, as the breeding ground for social problems. The family is fingered as the place where everything goes wrong: poor educational attainment, obesity, joblessness, stress, addiction, criminality, if not intentionally so, then accidentally so, according to policymakers.”

Jenkins warned: “Policymakers pose early intervention into a child’s life as the solution to any problem that might arise later. It is a flawed approach that has negative consequences: social solutions to such problems are neglected – structural issues are ignored; and the family has become the focus of intervention, intervention that seems to know no end.”

She said the assumptions behind this kind of approach “will cause more harm than good”.

Commenting on the Named Person scheme, she warned: “So every single child will have a named person – someone who is not their mum or dad, a member of their extended family, or in their circle of friends – to watch over them, and watch over their parents.

Jenkins highlighted: “Up until this scheme, professionals involved in children’s lives had to have a reason to be there: education, health or serious concerns about abuse. Up until this law, state intervention required justification – no longer is this the case.” 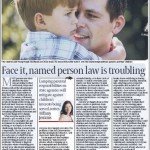