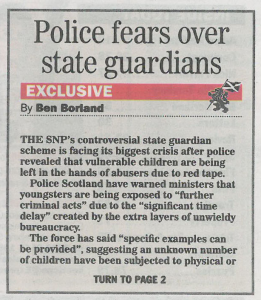 Police Scotland has warned that the Named Person scheme could delay removing children from abusers because officials are spending time conducting ‘wellbeing’ assessments.

It was revealed at the weekend that Scotland’s police force is concerned that children could be the victim of “further criminal acts” caused by “significant time delay” created by the extra layers of unwieldy bureaucracy linked to the Named Person proposals.

A NO2NP spokesman said a ministerial public statement is required “as soon as possible” to explain how many youngsters have been left in danger and for how long.

The Police Scotland warning is contained in an official police submission on the guidance to how the Children and Young People (Scotland) Act 2014 will operate.

The submission states: “A potential risk has been identified that ‘wellbeing concern’ assessments are being carried out by a range of practitioners from organisations when there is actual information that a child has or is the victim of abuse and or neglect deemed as criminal acts.

And it continues: “This has resulted in a time delay, at times significant, during which time the children (or other children) are exposed to the potential of further criminal acts and the potential for evidential opportunities to be lost or compromised. Specific examples can be provided if required.”

The NO2NP spokesman said: “This submission essentially discredits the entire Named Person scheme by telling the world that the policy risks allowing more abuse to take place while non-experts sit on evidence of serious criminality against children, and jeopardise the prospects of bringing abusers to justice. The Named Person policy is a catastrophic idea and it must be scrapped immediately.”

He added: “The allegations made by Police Scotland could not be more serious. Rather than speeding up help for abused and neglected children, the extra layers of bureaucracy significantly delayed the reporting of criminal acts against the youngsters.

“‘Wellbeing’ assessments, which are at the heart of the entire Named Person scheme, have apparently caused delays that allowed abused children to be exposed to yet more abuse.

“Named Persons, unlike social workers, are not experts in handling child abuse cases. It is unfair on teachers and health visitors to burden them with this responsibility. This statement from the police shows that involving non-experts in serious cases of abuse and neglect risks losing key evidence, allowing child abusers to avoid justice.

“This damning piece of new evidence gives the lie to the Government’s main defence for the Named Person scheme. The incompetent Named Person policy will not protect abused and neglected children – it will expose them to even more danger.

He continued: “The police offered the Government specific examples where following the Named Person policy actually delayed reports of child abuse and neglect. The public must be told immediately if the Government has asked for that evidence and if not, why not.

“The minister must make a public statement at the earliest possible opportunity about any and all cases where Named Person pilot schemes have resulted in delays reporting child abuse and neglect.

“This latest shocking development confirms that the Named Person policy is going to be a disaster: a disaster for abused and neglected children and a disaster for good Scottish families.

“The time has come for the Government to admit it has made a huge mistake and scrap the whole scheme.

The NO2NP spokesman added: “The Government will point to the fact that Police Scotland say they support the Named Person scheme. But what else are they going to say? The police can’t lobby against a key government policy. But they have essentially discredited the entire Named Person scheme by telling the world that the policy risks allowing more abuse to take place while non-experts sit on evidence of serious criminality against children, and jeopardise the prospects of bringing abusers to justice. The Named Person policy is a catastrophic idea and it must be scrapped immediately.” 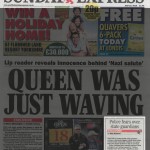 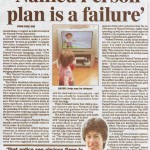