Following a great roadshow event in the town on Monday, a large group of local volunteers were out and about on Arbroath’s High Street on Saturday morning to get the message out – and what a great response they had! 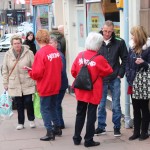 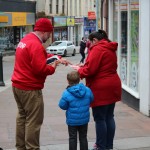 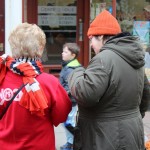 The spring weather certainly made it easier to spend time chatting to local shoppers this Saturday, but nonetheless there was a near constant stream of folk wanting to sign the online petition. We had people queuing up to do so and others who had been reading the flyer at one end of the High Street had been convinced to sign the petition when they reached the other end! 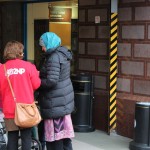 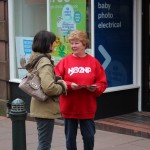 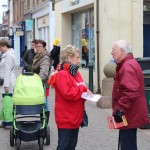 People of all ages were keen to sign, but especially young mums and dads out with their toddlers. They were shocked at what the state guardian will be able to do, accessing their children’s medical records and sharing them with others – and possibly their own records as parents – and all without their knowledge or consent. One man the team spoke to said “You know who a child’s Named Person is? Their mum or their dad!” 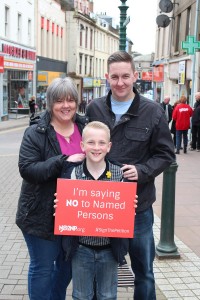 A number of teachers and social workers the team met had grave reservations about the scheme, while one lady they met said it was “like Big Brother”.

Time and time again, people had not heard about the scheme, but when it was explained to them, they were very keen to sign the petition. Arbroath has strong community values and locals were shocked at how much the Named Person will undermine families. Others were appalled at the £61 million already spent on the scheme, which could have been better spent on more social workers, teachers or police officers.

The message from Saturday morning was loud and clear – Arbroath says “NO to Named Persons!” 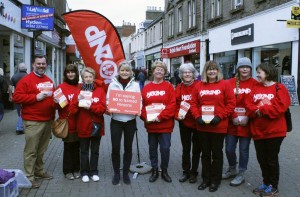 The NO2NP roadshow will be taking a break over Easter, but we’ll be in St Andrews for the next roadshow event on Monday 4th April – we hope to see you then!