We had to bring in extra chairs for Monday’s Roadshow in Arbroath. As many as 60 people filled the Assembly Hall at the town’s Webster Theatre, where our panel of speakers shared their concerns about the Named Person scheme. 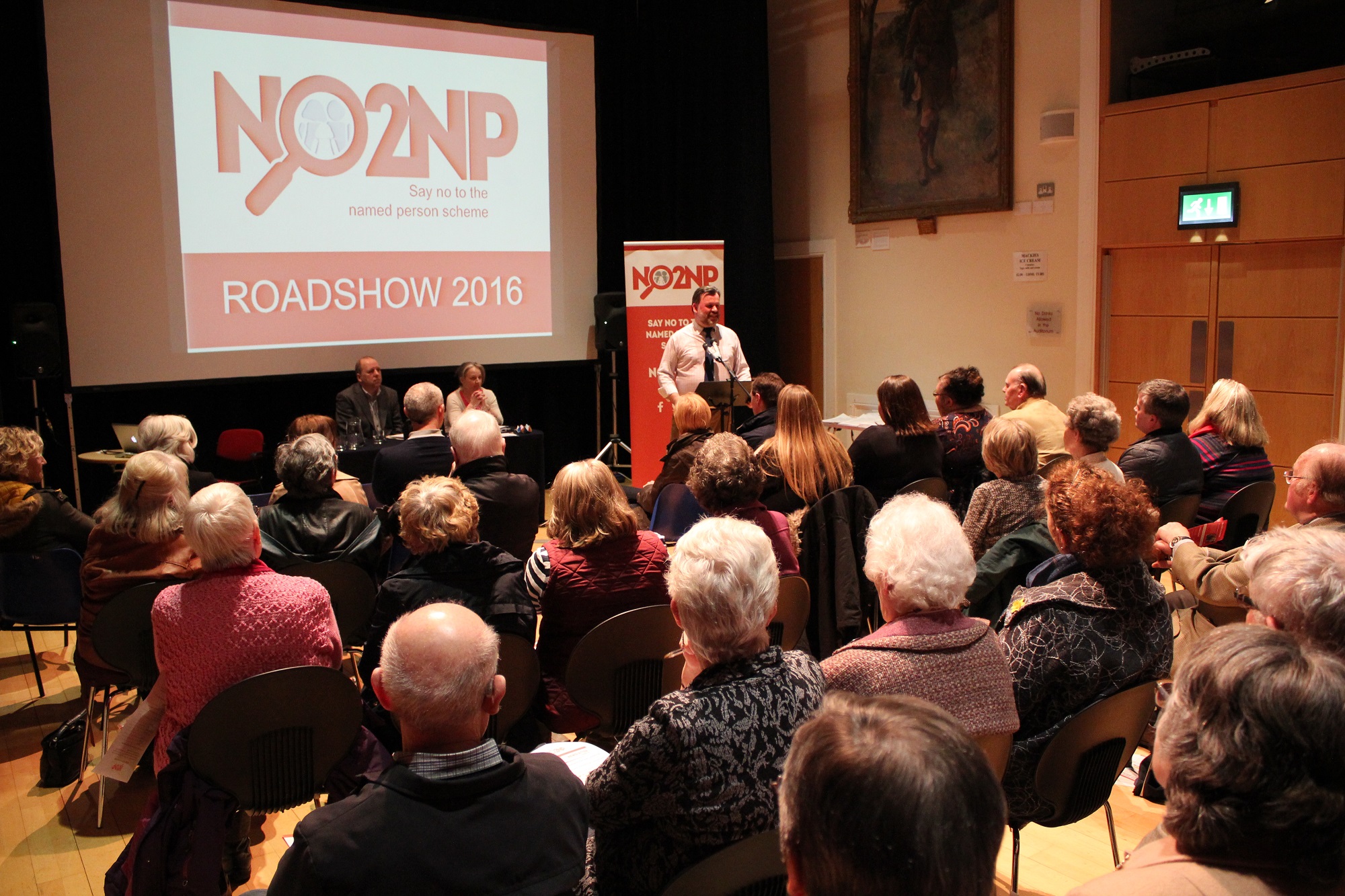 Nigel Kenny, from The Christian Institute, brought folk up to date with last week’s Supreme Court hearing. He gave a brief summary of the case, explaining how the scheme breaches parents’ and children’s right to privacy and family life. Nigel also outlined ways in which the scheme contravenes data protection laws.

The next speaker, who preferred to remain anonymous, expressed concern about the delivery of resources, with midwives not having time to listen to a parent’s concerns during a visit because they had to spend all their time going through the laborious SHANARRI checklist.

The speaker shared his own family’s experience of a Named Person. A simple matter regarding thumb sucking soon escalated, causing a health visitor to become increasingly hostile. After he decided to make a Subject Access Request, he received a 60-page document with information about his child. But much of it had been redacted (blacked out) because it “would have breached someone’s privacy”. As the speaker said during the Roadshow, there is nothing to “tick” on the Named Person’s list about good parenting, it is all about black marks for bad parenting.

Next up was Lesley Scott from TYMES Trust. She focussed on the claims made by Scottish LibDem leader Willie Rennie MSP, who recently said the scheme will help vulnerable children in Scotland. This is despite the fact that the GIRFEC model is for “every” child – a point clarified by the Government’s QC when he said that every child was now viewed as potentially vulnerable. According to Lesley, this means that “every parent and family is viewed as a potential risk”. 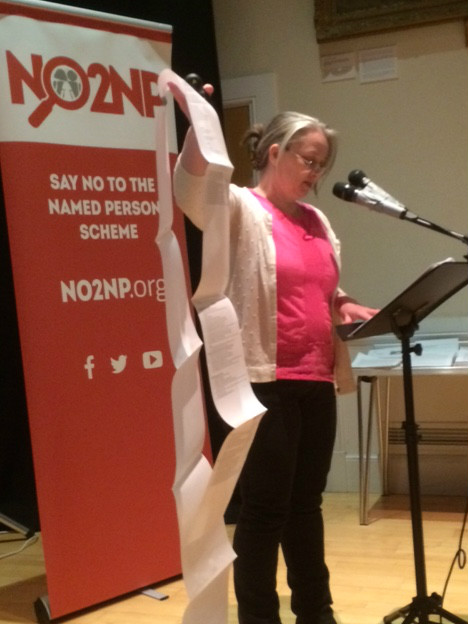 Lesley went through a number of slides in her presentation, outlining the strange ‘tools’ Named Persons are supposed to use to carry out their duties. Take, for example: the Parental Capacity to Provide Wellbeing pre-birth assessment form; the Wellbeing Wheel; the My World Triangle; the Reliance-Vulnerability Matrix; the ECOMAP; and the Cycle of Change.

As if that’s not confusing enough, Lesley explained that Named Persons have to consider 222 “risk indicators” that might affect a child, and 304 “outcome signifiers” of what good ‘wellbeing’ apparently looks like.

We were delighted that Beth Morrison from the local Special Needs Group, who had made a brief appearance in a BBC Scotland news story about the Named Person scheme last week, was able to step in at the last minute to tell her own story – many thanks, Beth! 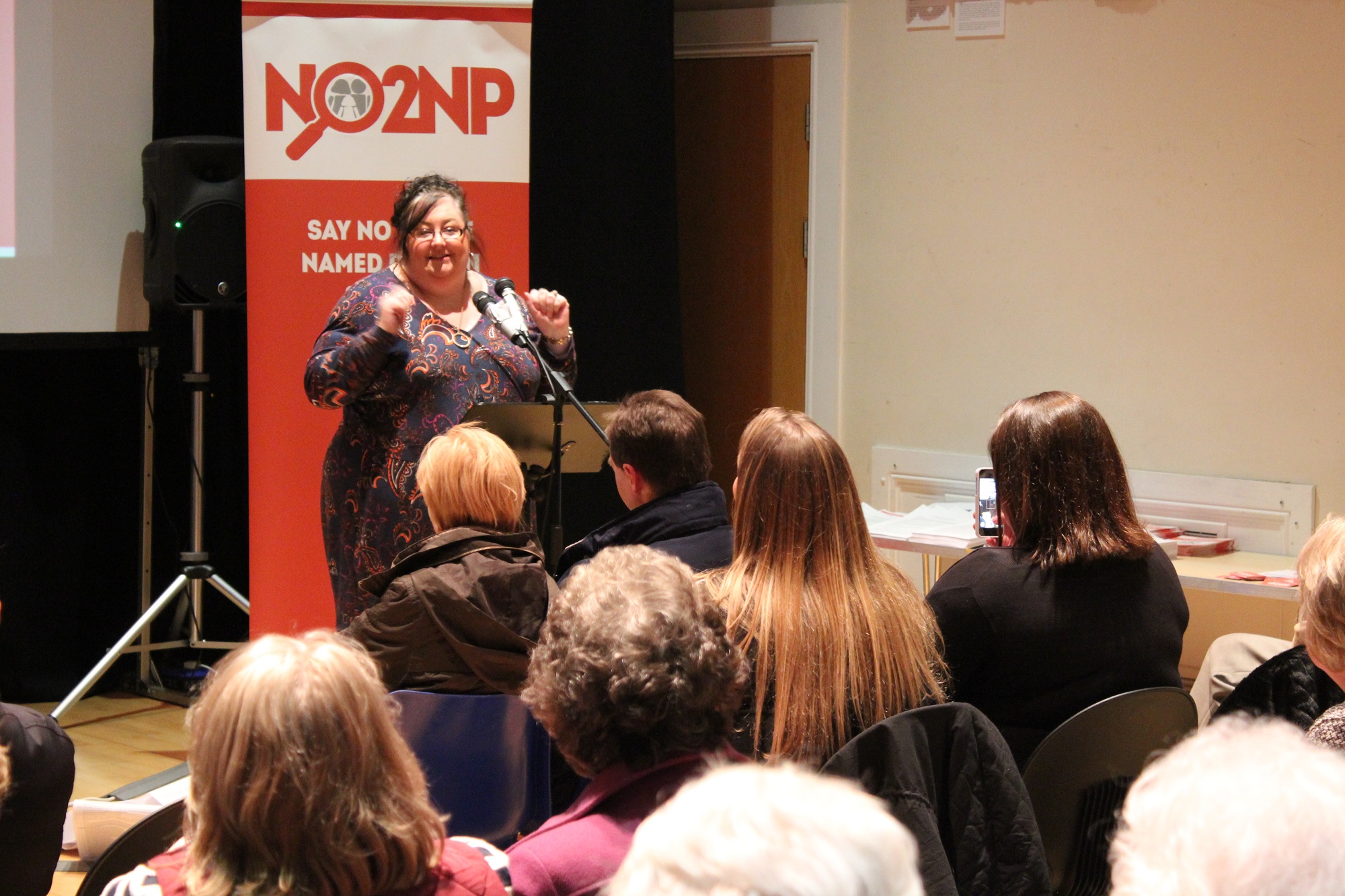 She described herself as “just a mum” with three children: the elder two have gone on to the careers they love, and the youngest, who suffers from epilepsy and is on the autistic spectrum, is a “fabulous” and “caring” child.

“You’d think that someone like me, with a vulnerable child, would be really excited about the Named Person”, she said. However, the biggest source of stress in her life has been the way the education authority has dealt with her son. Beth has had to fight for every inch of support and has been told by the head teacher (the Named Person) that he doesn’t need help.

Beth finished by saying that of the 213 families in the Special Needs Group, “not a single one of them wants a Named Person”, adding “my son already has a named person: it’s me, his mum.”

After Nigel shared some practical ways that folk could get behind the campaign, there was a lively Q&A session. Some of those who came along have even shared their views on film at the end – watch out for our forthcoming video. A large number of those present signed up to be volunteers, and we will be back in Arbroath on Saturday morning for another Action Day – if you live in Angus, we hope to see you there!