Following a successful meeting in Coatbridge last Wednesday, the NO2NP team were back in North Lanarkshire on Saturday with some dedicated local volunteers for an Action Day in Airdrie’s town centre. 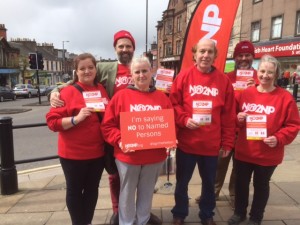 As with recent Saturdays, people were shocked to hear what the Named Person scheme will involve, especially the idea that they will be seen as the “head gardener” in children’s lives. Many were very happy to have their names added to the petition, while others who had already done so signed up as volunteers or asked for a car sticker to be sent to them. 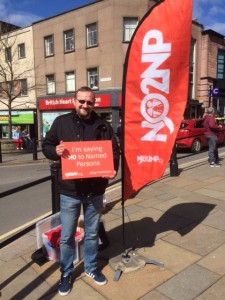 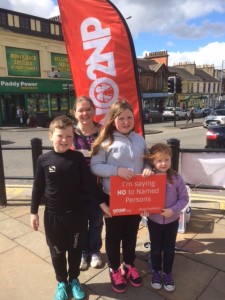 One mum who had been at the Coatbridge meeting told us she was “shaking with anger” at the end, while another mum we met for the first time told us she thought it was “one of the worst things that’s been done” by our politicians.

We met several teachers, as well as a health visitor and a social worker, who were all opposed to the Named Person scheme. One teacher said she and her colleagues had been drawing lots in the staff room to see who was going to be the Named Person, because none of them wanted the job!

The team will be taking a break for a couple of weeks, but we will be in Kilmarnock on Wednesday 18th May, with further roadshow events and action days to come! Do check the website or our Facebook page for details.