Kids told Named Person is ‘Head Gardener’ of their lives

When you speak to people about the Named Person scheme, their concerns often boil down to one central point: it undermines the role of parents.

Despite clumsy attempts by politicians to reassure them, ordinary mums and dads remain alarmed by the prospect of a state guardian with legal responsibility for overseeing their own child’s happiness.

You would think, in light of these concerns, supporters of the scheme might avoid anything which conjures up notions of the ‘Nanny State’ or ‘Big Brother’.

When the Named Person legislation was being considered in 2012, the Children’s Parliament spoke with over 100 children at schools across Scotland. 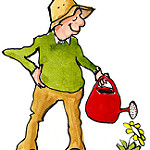 To help pupils understand the Bill, they encouraged them to imagine Scotland as a garden, with each child as a special plant growing within it. They were told that “all the adults in their lives” are “Gardeners”, and the Named Person is the “Head Gardener”.

It’s a bizarre analogy. Yet the phrase was readily endorsed by the Government in its summary of children’s responses to the Bill. (By the way, some of the kids themselves weren’t easily fooled. Read their comments here.)

To quote directly from the Children’s Parliament consultation document:

The children identified that all adults – family members and professional people – have and share equally a duty to make sure all children are healthy, happy and safe.

“All adults…share equally”? What information were these children given to make them think the duty on a teacher or GP or friend – or Named Person – is ‘equal’ to that of their own parents?

Do you think a Named Person has equal responsibility with you to “make sure” your child is “healthy, happy and safe”?

When advocates of Named Persons talk in this kind of unguarded way, they confirm the suspicions of those who think the Named Person will become a kind of co-parent.

In fact, it’s worse than that. Because if parents are just one “gardener” among many, and the Named Person is the “Head Gardener”, its quite clear who is ultimately in charge.