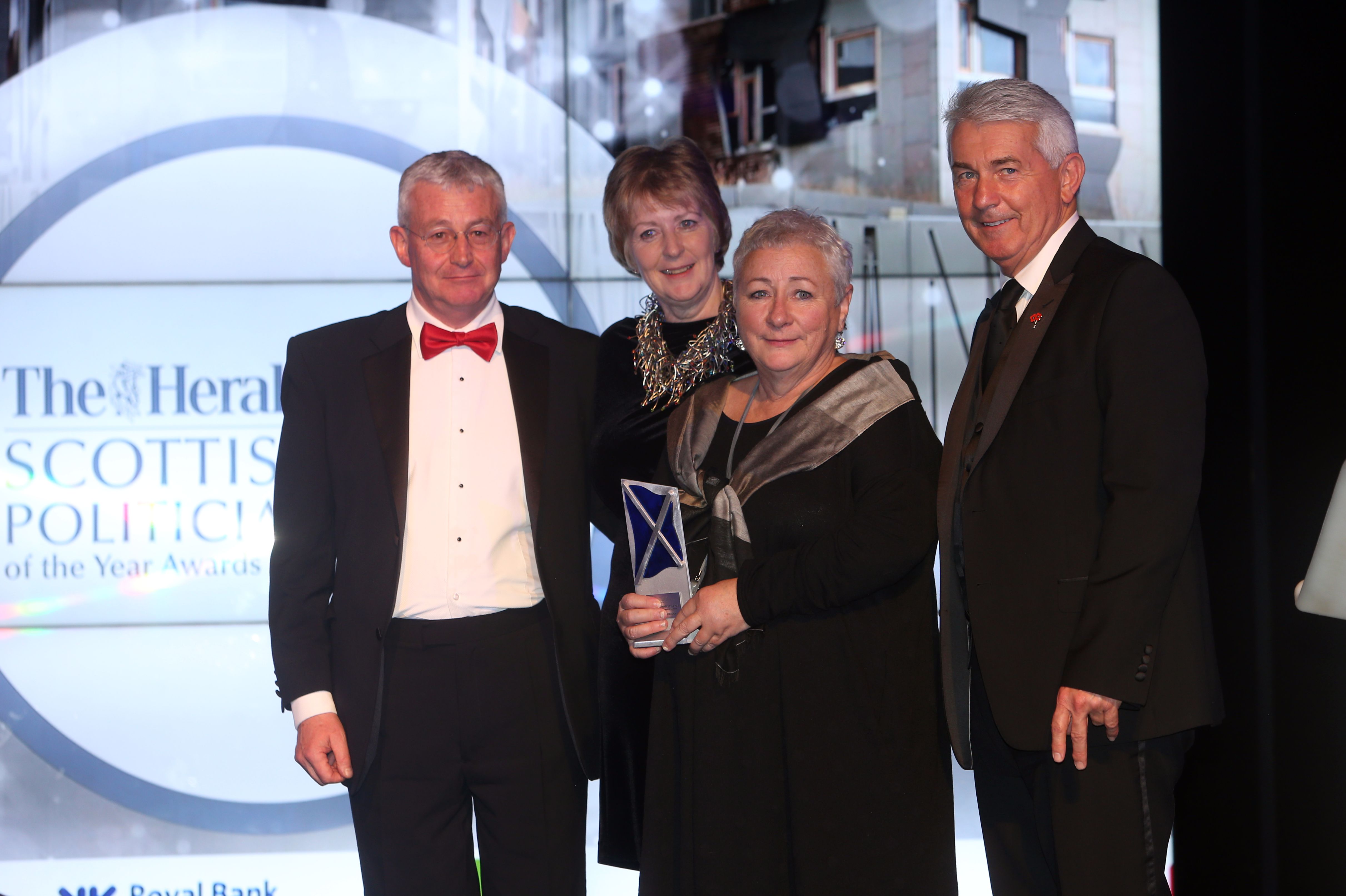 Naysmith highlights the Government’s failure to answer simple questions such as: “Will the scheme divert resources away from those who need them most? What happens if a named person thinks a child needs intervention but social workers think there is no need (or resources)? How will it help, teachers and health visitors already look out for children in their care?”

He stresses that “not being able to explain – clearly – why a universal named person scheme will be able to help families better or sooner than existing arrangements has been a disaster.”

Naysmith concluded: “Maybe the legislation is bad to the bone, or maybe it just needs to be better communicated. But ministers’ current favoured explanation – “you never know when someone’s going to need help” – just doesn’t cut it.”

He also commented on the recently revealed consultation responses to the Government’s guidance on how the Named Person scheme would work in practice.

Naysmith said: “The report on the Government’s guidelines was generous to a fault. For example it found 38% of organisations said examples in the guidance hadn’t been helpful, while 63% had. This is recorded as ‘in general, organisations found the examples… helpful’.

“Yet opaque jargon and a lack of detail have left the public suspicious. Even organisations repeatedly told researchers the guidance was complex, repetitive and left them none the wiser.” 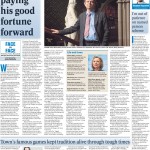 Media round up this week: w/b 29th June

Pressure has been mounting on the Scottish Government’s Named Person scheme this week, with a succession of media stories reporting serious concerns about the plans.

Confusion over plans to appoint ‘named person’ for every child in Scotland
Herald Scotland, 01 July 2015

Herald View — Getting it right for youngsters
Herald Scotland, 01 July 2015

Teachers, who are due to become Named Persons for their pupils, have voiced concerns about the increased workload the scheme will bring.

Herald Scotland reported a letter it had seen from the Scottish Government asking schools if their “existing on-call arrangements outside term time for senior staff could ensure the ‘continuity’ of the named person service”.

The country’s largest teachers’ union, EIS, said that it would have “serious concerns” about any related workload demands during holidays.

The union, which says it backs the scheme in principle, criticised the lack of clarity over how the scheme would work and said its members were becoming increasingly worried about the extra burden the Named Person role will place on them.

An EIS spokeswoman said: “While we await the publication of final statutory guidance on the role of the named person which comes into effect in August 2016, there is the problem that in schools across the country, different things are being said about how the named person service will operate. Teachers are becoming increasingly concerned about the demands likely to be made of them which will have implications for workload and potentially for conditions of service.

NO2NP spokesman, Simon Calvert, said: “Teachers have a hard enough time and carry out what can sometimes be a thankless job without adding to their burdens during their well-deserved holidays.”

Herald Scotland: ‘The devil’s in the detail and we need answers’

An editorial in a newspaper that supports the Named Person scheme has expressed concerns about the plans and called on the Scottish Government to revisit the threshold for the Named Person.

In a leader comment accompanying a front page article, Herald Scotland concluded: “Above all the change in the threshold for intervention from the more appropriate “risk of serious harm” to the vague “concern over welfare” should be reconsidered.

The paper said it had consistently supported the Named Person scheme “but as always with well-intended laws the devil lies in the detail or, more usually, the legislative guidelines”.

In the editorial it said “we report with concern today the findings which show that the consultation over the guidelines issued on the legislation shows that even among the organisations directly involved only 55% describe these as clear”.

It stated: “Among health boards, royal colleges, local authorities and third sector bodies, almost half do not believe the guidelines are adequate. The issues are not minor – clarity over the named person (NP) role, around when parents can be excluded from decisions, what happens when the relationship between the NP and family breaks down, these are all big questions.

The paper also said there had been a “failure to clarify the terms of intervention”, pointed out “pragmatic concerns” such as the extra workload on “already hard-pressed health visitors and head teachers”, and raised questions about human rights concerns for parents.

NO2NP spokesman said the consultation responses indicated the growing strength of public opinion against the proposals and added:

“What is clear from the consultation is that people are afraid. Afraid of unnecessary and unwarranted breaches of their family privacy. Afraid the Named Person will be unaccountable. The Government analysis countenances “clarifying the circumstances” in which the Named Person can “exclude” parents from decision making. We are not talking about ‘at risk’ children where, of course, social services can make decisions over the heads of abusive or neglectful parents. No. The job of the Named Person is to monitor and enforce children’s happiness according to a Government checklist. The official information leaflet for parents says the Named Person can intervene in decisions about decorating a child’s bedroom or what they watch on TV. Is that the kind of decision from which parents might be “excluded”?

“And how can the Government still talk as if there is any scope for an “opt out” when their own lawyer told the Court of Session that allowing families to opt out would “defeat the purpose of the scheme”. There is no opt out in the legislation so how can there be one in the guidance?

“The Government document repeatedly highlights ‘organisational’ responses and ignores members of the public in order to scrape together 55% support for their Named Person guidance. But 98% of responses from individuals opposed it. Governments are infamous for trying to spin statistics but this is shocking. 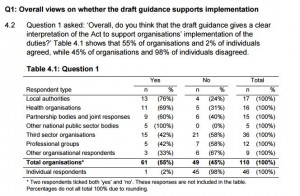 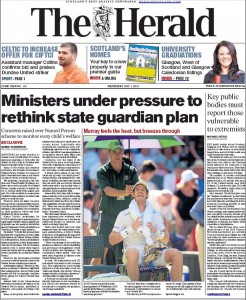 Online sources
Herald View — Getting it right for youngsters

The Herald: Fears “that NHS staff and teachers…will become swamped with extra work.”

Concerns about how the Scottish Government’s policy of allocating a Named Person to virtually every child in Scotland will impact upon the professionals who will have to fill the role have been expressed even by those who support the scheme.

NO2NP have long been arguing that teachers, who will account for the vast majority of Named Persons, are being asked to take on a significant new responsibility without any obvious extra resource being provided.

Now, according to a report in The Herald on 7 February, both the Royal College of Nursing Scotland and the Association of Headteachers and Deputies in Scotland, are voicing similar worries.

“Plans to appoint state-appointed ‘named persons’ to look out for the welfare of every child in Scotland are continuing despite fresh concerns that NHS staff and teachers appointed to the roles will become swamped with extra work.

“There is no limit on the number of children a single person can have responsibility for, meaning a headteacher could potentially become named person to several hundred pupils.

“Theresa Fyffe, Director of the Royal College of Nursing Scotland, said the scheme, which is already being rolled out in areas including Highland, Edinburgh, Fife, Angus and South Ayrshire, would enhance existing public services. However, she warned that if the approach was to be successful, it must be fully resourced. Both the NHS and local authorities, who would largely be responsible for implementing the policy, are facing significant pressure to their budgets. Ms Fyffe said:

‘We welcome the Scottish Government’s commitment to recruiting more health visitors, but with the named person responsibility coming on top of recent changes to the workload of health visitors, many of our health visitor members have deep concerns that even with the planned boost in numbers there just won’t be enough hours in the day to fulfil this important role.’

“The position was echoed by Greg Dempster, General Secretary of the Association of Headteachers and Deputes in Scotland, who said that while he was supportive of the named person policy, questions remained over the increased burden it would create for school leaders. He added:

‘The Government and local authorities are trying to bring that bureaucratic burden down, but we are very concerned about the workload that this might generate. It’s something that needs to be worked through in good time, before full commencement.’”

The much anticipated legal challenge against the Scottish Government’s controversial Named Person provisions got underway this week in Edinburgh’s Court of Session. Aidan O’Neill QC is representing the campaigners opposing the scheme and warns that plans for a Named Person for every child in Scotland is a “dangerous route to go down”.

See the latest news roundup on the court case:

Legal papers challenging the Scottish Government’s Named Person plans were lodged at Edinburgh’s Court of Session yesterday. There is widespread opposition to the proposals and concerned parents and other groups turned up to help deliver the documents under the spotlight of the media.

Here is a round up of the news reports.

Dangerous move by the state
The Press and Journal

Challenge to guardian law in court
The Courier & Advertiser