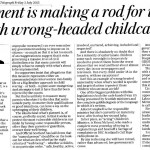 Media round up this week: w/b 29th June

Pressure has been mounting on the Scottish Government’s Named Person scheme this week, with a succession of media stories reporting serious concerns about the plans.

Confusion over plans to appoint ‘named person’ for every child in Scotland
Herald Scotland, 01 July 2015

Herald View — Getting it right for youngsters
Herald Scotland, 01 July 2015