If only someone had sounded the alarm about the potential of the Named Person scheme to breach human rights ** BEFORE ** the Children and Young People (Scotland) Bill was passed! 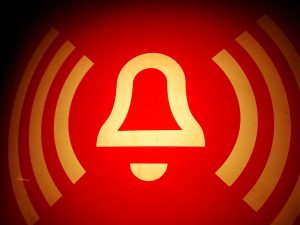 And if only someone had raised those concerns with the Scottish Government. Perhaps with the Lord Advocate (Frank Mulholland at the time), the Government’s chief legal adviser, who would have had powers under the Scotland Act 1998 to refer the provisions of the Bill to the UK Supreme Court.

Perhaps it could have saved everyone a whole lot of trouble and expense, I hear you say.

Yes. But only if they had listened.

The Christian Institute, which was a lead party to the Named Person legal challenge, recently disclosed that it wrote to the Lord Advocate on 12 February 2014, a week before the Children and Young People (Scotland) Bill completed its passage through Parliament.

The Institute’s solicitor highlighted that the “blanket nature” of the Named Person scheme could result in “disproportionate and unjustified interference” in family life, in breach of Article 8 of the European Convention on Human Rights.

The Christian Institute raised concerns about the key responsibilities of a Named Person.

The letter also warned that the provisions of Part 4 of the Bill could “fail the test of being ‘in accordance with the law’”.

These concerns sound familiar to you?

That’s right – these were the same grounds on which the UK Supreme Court struck down the legislation in July this year.

“we conclude that the information-sharing provisions of Part 4 of the Act… are incompatible with the rights of children, young persons and parents under article 8 of the ECHR because they are not ‘in accordance with the law’…”

It continued, “…may in practice result in a disproportionate interference with the article 8 rights of many children, young persons and their parents, through the sharing of private information…”

And held, “…the information-sharing provisions of Part 4 of the Act are not within the legislative competence of the Scottish Parliament.”

How could the Lord Advocate have dismissed these concerns?

The letter from The Christian Institute was sent a week before the Bill was passed in Parliament, and five weeks before it received Royal Assent.

The Lord Advocate was well within his time frame to delay the Bill and refer it to the Supreme Court.

Instead, he instructed an ‘Assistant Legal Secretary’ to write back and dismiss the concerns. The reply said the Lord Advocate had “taken account of the points raised in your letter, but has not considered it appropriate to make a reference”. 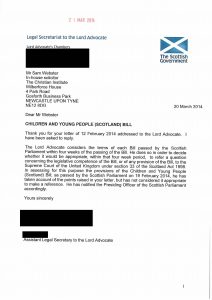 If only they had listened…