The Government is responding to massive public opposition to the Named Person with pamphlets trying to explain the scheme.

But the harder they try, the more confused they become.

The most recent leaflet is called Named Person: Supporting children, young people and parents and, to be fair, we do quite like its use of origami bird graphics. But the actual content (i.e. the important stuff) is unlikely to allay the fears of genuinely concerned parents. 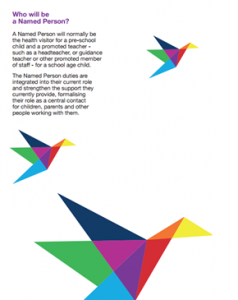 • The leaflet explains that, from August 2016, every child in Scotland will be appointed a Named Person.

• It says there is “no obligation” on families to use the Named Person. Yet everybody knows the scheme is compulsory. All children will have a Named Person by law. It will be implemented regardless of whether or not there is any need for state intervention. And the authorities will be able to collate and share data on you and your children without your knowledge, let alone your consent.

• Elsewhere, it says Named Persons have “no new legal powers to compel parents…to accept advice, support or help”. In reality of course, if mums and dads refuse to engage with the scheme, they will inevitably find themselves under scrutiny. Separate Government guidance even lists “parental resistance” as a “risk indicator”.

• The leaflet refers to ‘wellbeing’ over ten times. This is because a Named Person will be tasked with looking after a child’s ‘wellbeing’. It sounds nice. But other guidance says “wellbeing is another word for how happy you are”. How can the state monitor the happiness of every child?

• Teachers or health visitors will most likely become a child’s Named Person. According to the leaflet, their new duties are simply ‘integrated into their current role’. In other words, it places an extra burden on busy professionals. Remember that health visitors and teachers have already expressed serious reservations. Advice to local authorities issued by an implementation partnership group even says: “Compliance with the legislation can only be achieved through significant transformational change supported by systems, practice and culture change.”

• The leaflet claims that the new law and supporting documents provide “a clear set of steps for practitioners”. Yet the guidance on implementing the scheme is littered with strange graphics.

– The ‘Wellbeing Wheel’ is to be used to examine eight ‘key’ aspects of every child’s life, known as the ‘SHANARRI’ indicators: Safe, Healthy, Achieving, Nurtured, Active, Respected, Responsible, and Included.

– In total, teachers and health visitors will need a working knowledge of 221 risk indicators and 308 ‘wellbeing’ indicators.

• The leaflet refers to “the needs of vulnerable children and families”. Yet the Named Person law says nothing about vulnerability. Appointing a Named Person to every child, regardless of need, will further overstretch resources. Those that really need help will be more likely to be missed.

• In explaining the role of Named Persons, the leaflet gives the example of “a health visitor [asking] for help from a speech and language therapist”. This seems innocuous enough. But why should parents have to rely on a Named Person to agree that their child should get a service?

• It assures us that families will “in most circumstances” know when confidential information is being shared. This may be the biggest falsehood in the entire document.

– The concept of parental consent appears absolutely nowhere in the legislation.

– The Information Commissioner’s Office suggests data protection law should not be seen as an obstacle to data sharing.

– And guidance to health visitors actively discourages them from seeking consent for data sharing.

It’s all just very confusing. No wonder so many parents are saying ‘No’ to Named Persons.