The controversial Named Person scheme has received yet more criticism, and this time it’s from those who will be taking on the role of Named Persons when the law comes into force in August.

Health visitors, represented by the trade union UNISON Scotland, were asked what they thought of the new Named Person proposals and “the implication for their workloads”, in an online survey.

The survey, published earlier this year, revealed that more than half of health visitors – 52 per cent – do not think the Named Person scheme contained in the Children and Young People (Scotland) Act 2014 “would be a good thing”.

Under the new legislation health visitors will act as Named Persons for children up to the age of five, but the survey contained a long list of deeply damaging criticisms of the scheme.

The health visitors’ fears included:
• being made “scapegoats” if a child is harmed
• facing legal action and being sued by parents
• being consumed by an “avalanche” of information
• having their relationships with parents damaged
• concerns the system will collapse due to extra work at a time of staff shortages

NO2NP spokesman Simon Calvert said: “It doesn’t get any worse than this for a Government. We now have Named Persons themselves queuing up to attack the very scheme they have been tasked with carrying out.

“In the wake of this damning indictment, the Scottish Government should have the humility to listen to what the front-line professionals are saying and ignore the zealots who cooked up this policy and are anxious to defend their legacy.

“It is obvious that it cannot work and cannot be made to work. There are over 1 million children in Scotland. Every one of them is meant to have a Named Person actively monitoring their happiness according to Government targets. The system cannot cope. There are too few staff with too little training to cope with too much work and too many children.”

Health visitors pulled no punches with their views when they were polled by UNISON – which has 60,000 Scottish members.

Responses included:
“I think health visiting will be a dumping ground from other service as we will be the ‘named person’. There will be added responsibility with more isolation of the role”

“I think there may be a number of issues which will create excessive amounts of information sharing in a very formalized way. This will I think clog an already stretched system.”

“This is already impacting my role as various agencies are contacting the HV team to request child’s planning meetings and also to report child protection issues which should in fact be highlighted to Social Work.”

“It will leave the health visiting service as scapegoats when children are harmed, not meeting their potential or when parents feel they are not getting what they are entitled to, such as nursery paces.”

Reflecting on the responses from members, the union said: “Very worryingly, the comments showed a workforce with low morale, facing increased responsibilities, feeling stretched to the limits. Not an opportune moment to add a completely new role to this workforce.”

NO2NP spokesman Simon Calvert added: “The Government cannot accuse their own Named Persons of being alarmist. They must take on board everything they say and bring the process of implementing this project to an end immediately.

“How much more evidence do they need?”

He commented: “In recent weeks opposition has grown and the national media has even mocked the policy with April Fool spoofs. It is clearly perceived by the public and the media as not fit for purpose. Its time is up.

“The state should protect the children that need protecting, and help the families who want help. But this universal surveillance scheme will just bury the needy cases even deeper, and burden already overworked health visitors and teachers beyond human limits.” 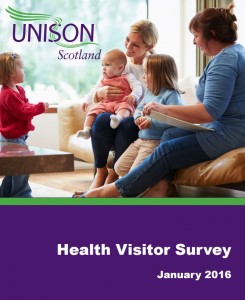