The large Salisbury Suite at the Macdonald Holyrood Hotel in Edinburgh was nearly filled to capacity on Tuesday morning for the first NO2NP Roadshow event since the summer break.

Dr Stuart Waiton of Abertay University in Dundee opened the meeting by saying that the autonomy of the family was being undermined by social policy across the board, with an overemphasis on “early intervention” by professionals to sort out children’s problems.

Liz Smith MSP then spoke about the huge mailbag she had received from people concerned about the scheme, which she says destroys the trust between families and professionals that is essential in bringing up a child.

She said that the scheme was “repugnant” and a “badly mistaken policy” that “diminishes resources”. The volume of support for the NO2NP campaign is growing all the time, with almost 12,000 people having now signed the petition. The appeal of the campaign “goes well beyond party politics” and the breadth of political views of those involved in it was “a good thing”.

She also pointed out that the bureaucracy of running the scheme would be enormous and too difficult to put into practice. The scheme has been “mis-sold” by the Government and the responses that concerned citizens have received have been “inaccurate” and “patronising”, she said. The Government, who are telling people how to live their lives, has not been shown in a good light, she added. In closing, Liz urged people to get involved, as it is “such an important campaign”.

Next up was Lesley Scott, Scottish representative for The Young ME Sufferers (TYMES) Trust.

She picked apart the three main arguments that have been used by the Scottish Government to justify the scheme:

1. “We’re doing all we can to help vulnerable children”
2. “We’re just formalising what we’ve been doing for ages”
3. “And Parents have asked for it.”

Lesley pointed out, firstly, that the word “vulnerable” does not appear anywhere in the legislation or the Government’s guidance and that their own QC admitted in the recent appeal case heard in the Inner House that every child is seen as potentially vulnerable. The corollary of this is that every parent is therefore viewed as potentially negligent or abusive. This will have a significant impact on how parents will be viewed and treated. If children, parents and associated adults do not agree with all of the Named Person’s views, then they will be treated as “non-engaging”: the balance has shifted dangerously in favour of the state.

The next argument – that local authorities are simply formalising what they have already been doing – has not been reflected in the attitudes of the professionals tasked with administering it, only a minority of whom think they currently have the capacity to gain an accurate and deep understanding of how to provide it.

And the contention that parents asked for the scheme is misleading at best, as parents with disabled children in the Highland region asked for a single, voluntary point of contact for accessing services. But that is not what they have got with the legislation and any success in the Highland Pathfinder has been shown to be down to other causes than the GIRFEC approach.

Lesley concluded by saying that the Government’s “disjointed excuses are shown to be a smokescreen and the true purpose of the legislation comes into view; it is a transfer of authority from your family to the state – an assault on the autonomous family unit”.

After a compelling new campaign video was shown, independent social work consultant Maggie Mellon spoke about her opposition to the scheme. She said that “parents are responsible for children’s upbringing, not services”, and that it is a very easy thing for professionals to display prejudice, when they don’t have the full picture. Civil servants have driven through this legislation but they haven’t thought through how dangerous it will be. People thought that they were getting a single point of contact, but that’s not what the legislation says. It doesn’t give parents or children the right to be consulted, as the Named Person is to take action “where he or she considers it to be appropriate to promote, support or safeguard the wellbeing of the child or young person”.

Commenting on the enormity of the universal scheme, Maggie remarked that “you can’t get all the sand on the beach through a little sieve”. A head teacher of a primary school isn’t going to have the time or the knowledge to explain your child’s needs to a range of professionals. Maggie said that she is against the Named Person scheme because “it’s wrong and it will cause damage”.

She said we should use the threat of compulsion far less than we do. She commented: “There’s too much compulsion and not enough compassion”. The Act moves the threshold from “at risk of significant harm” to “any concern about anything that might present a risk to a child’s wellbeing”. Instead of addressing the real needs of children, it is sinister surveillance. It’s not a point of contact for families to access services, she said, but a point for those services to access children. It’s as if the state is saying “We’re central, you’re peripheral”.

Nigel Kenny from The Christian Institute finished the formal session by taking everyone through the Action Packs that had been prepared for the meeting, before the usual lively Q&A finished off the meeting.

The next stop for the NO2NP Roadshow will be Glasgow on Monday 14th September at the Couper Institute, 86 Clarkston Road at 7.30pm – hope to see you there! 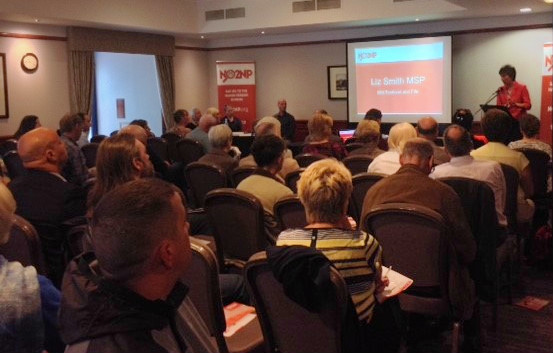 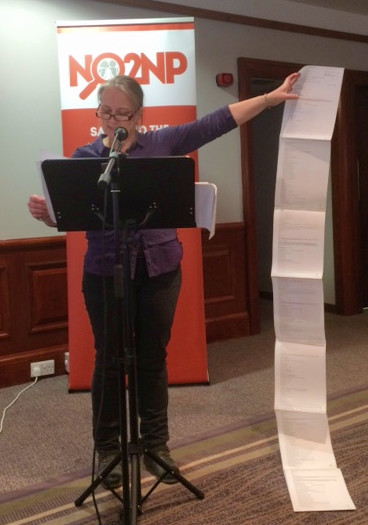 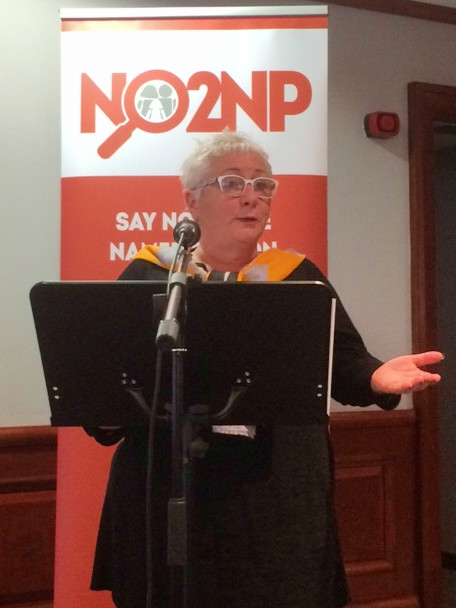 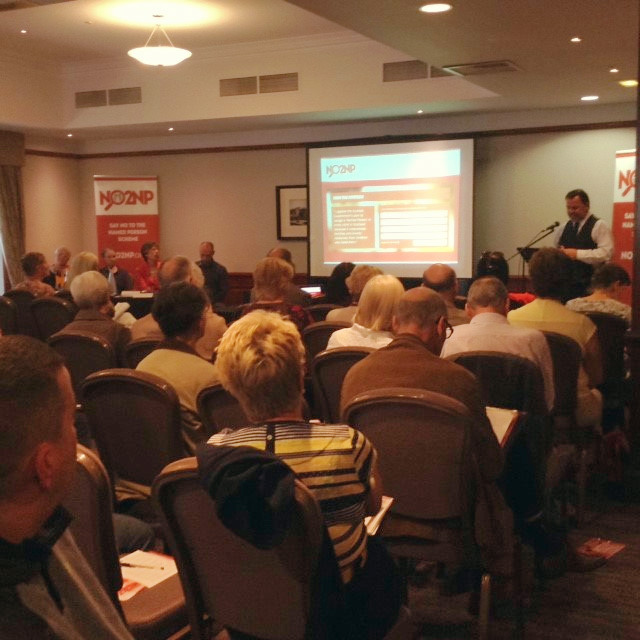 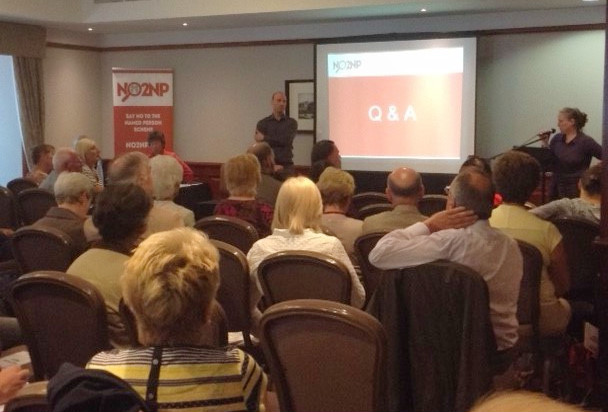