There was a packed gathering in Aberdeen on Monday night for the latest stop of the NO2NP Roadshow. Folk from a wide range of backgrounds came to hear our panel share their concerns about the invasive Named Person scheme.

The opening speaker, an academic who wishes to remain anonymous, pointed out parallels between the desire of socialist states to control society, with the Named Person scheme and its all-encompassing influence over every aspect of family life. He said while the Named Person scheme was intended to catch the bad parents, the effect will be that everyone will actually be trapped by it.

The speaker spoke movingly of his own family’s experience at the hands of proto-Named Persons who had misunderstood issues with his own children, leading him to submit a Subject Access Request under the Data Protection Act to see what had been recorded about his children. He was shocked to discover a 60-page document and even more appalled to find that huge swathes of it had been redacted – blotted out in black, because allegedly these issues did not relate to him or his children!

He also spoke about the weaknesses of the complaints procedure, something that the Scottish Public Service Ombudsman has recently expressed concerns about too. He found that his complaint had only resulted in the conclusion that “professionals are entitled to make professional judgments” and his only recourse now would be to go to judicial review, something his solicitor said would cost him at least £15,000!

The speaker also expressed his concern for the health and teaching professionals who will be landed with this huge responsibility, with their careers on the line should anything go wrong on their watch. “They’re not trained to be police detectives”, he remarked, concluding that he hoped the NO2NP campaign would relieve these professionals of their anxiety by securing an end to the scheme!

Next up was Lesley Scott from TYMES Trust, who said that the Named Person legislation had introduced an “authoritarian and illiberal scheme”, which “poses a considerable threat to family autonomy.” Lesley went on to talk about the National Practice Model, which is the GIRFEC ‘toolkit’. It is used to assess the ‘wellbeing’ of every child in Scotland and enables practitioners to investigate and assess all associated adults. 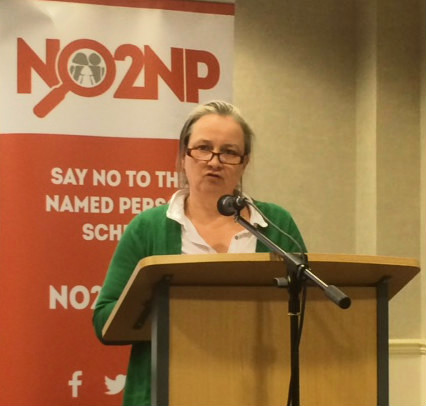 However, no one is quite sure what ‘wellbeing’ really means. This was highlighted in a debate in the Scottish Parliament in December last year, when MSP Alex Johnstone asked SNP MSP Stewart Maxwell if he could define wellbeing. Lesley played a video of the exchange, during which Mr Maxwell berated Mr Johnstone for asking such a “ridiculous” question – yet he still wasn’t able to answer it! 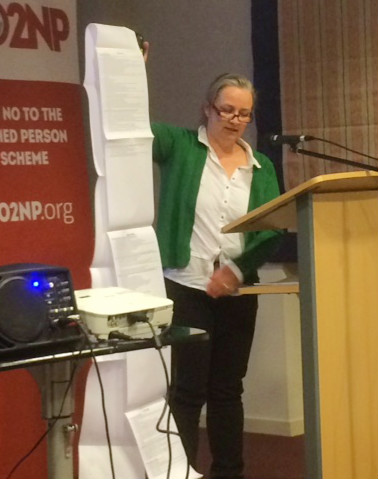 Lesley went on to explain that the “wellbeing wheel” was based on the eight SHANARRI indicators, and it also had some 304 “outcome signifiers”. She went on to highlight the complete vagueness of what constituted a “wellbeing concern”, which the Government’s guidance says can be “any matter…arising from any factor”. Lesley then explained how a child’s life is mapped out using such tools as the My World Triangle, the Resilience-Vulnerability Matrix and the three-staged National Risk Framework, where 222 “risk indicators” include: being under 5 years old, illness within the extended family, experience of bereavement, parental resistance or limited engagement, or the parent having a different perception of the problem. Lesley concluded by saying: “This GIRFEC legislation is founded on universal suspicion. It pours doubt upon parents and families, eroding the autonomy and uniqueness of family life. In short, it relegates parents to little more than the registered keepers of their own children.” 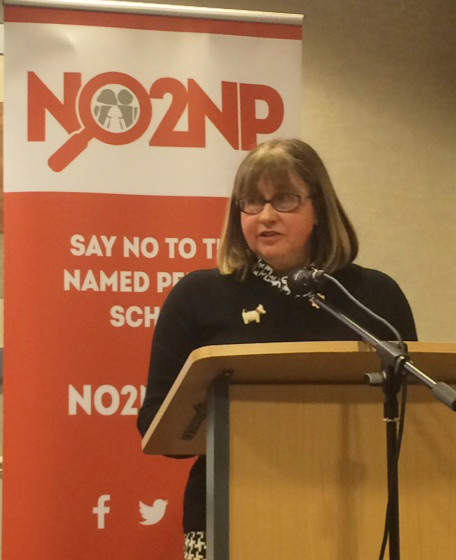 Alison Preuss of the Scottish Home Educators Forum then showed a video of Maureen Falconer of the Information Commissioner’s Office, explaining in a tutorial before the legislation had been passed that the Children and Young People (Scotland) Bill would “lower the trigger” not only for sharing information (down from “risk of significant harm” to “any wellbeing concern”) but also for child protection-like intervention. Alison suggested that Maureen seemed to put “sharing before caring”, in other words sharing data about families whenever Named Persons deemed it “appropriate”. This has been made possible because the Scottish Government passed ‘enabling’ legislation to make it legal to bypass the reserved UK-wide Data Protection Act, but only north of the border, “where children are apparently at disproportionate risk from their parents”, she said. Alison continued: “by lowering the threshold for state interference, every child and family member will be compulsorily databased and profiled so that dissenters can be easily identified and suitably ‘remediated’.” She went on: “The fact is that GIRFEC leaves Scots citizens with less legal protection than their counterparts in the rest of the UK when it comes to the use of their personal information.” 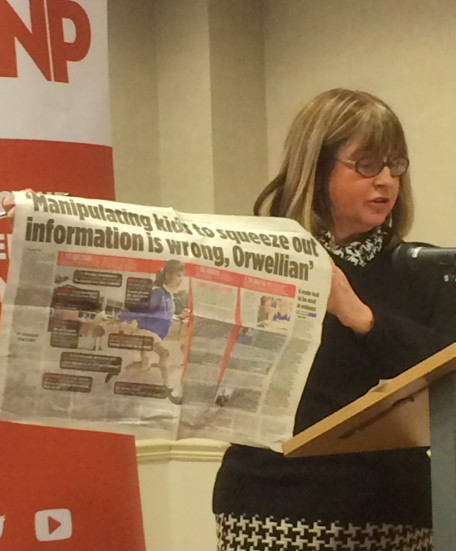 Alison held up a copy of the Mail on Sunday, which carried a major story in both its UK and Scottish editions about the covert psychological profiling of pupils in our schools and even nurseries. When she last looked, it had been shared 4300 times and there has been wall to wall outrage on social media.

Alison concluded by telling those gathered: “You should be aware that your children’s most personal thoughts and feelings are being interrogated in classrooms in the guise of ‘resilience testing’ without your knowledge, let alone consent.

Messing with young minds should not be the remit of school teachers, but has become routine with the introduction of the Curriculum for Excellence which, not very coincidentally, shares the same “well-behaving” outcomes as GIRFEC. Children are being moulded into compliant citizens who can be more easily micro-managed through life. Any dissent will be quickly identified and quashed by a series of interventions to get them back on to their state approved path of ‘getting it right’-eousness”.

Nigel Kenny from The Christian Institute then reminded the audience that our judicial review is due to be heard in the Supreme Court next Tuesday and Wednesday and, if successful, would “strike down” the legislation and nullify it before it comes into force in August. But the legal challenge is only one part of the campaign – the other part is grassroots public opposition to the unpopular scheme to let the Scottish Government know that its citizens are saying “NO to Named Persons” across the country. Several people signed up as volunteers, many of them committing themselves to join us on Saturday morning for our Action Day in the city centre. If you are free to help us raise the campaign’s profile in the Granite City, please contact us on volunteers@no2np.org