Is your home cosy? Do your parents make you feel special? Who clothes you and cooks for you? These are just some of the questions nursery kids could be asked by Named Persons in surveys proposed by local councils.

And they plan to store all the harvested confidential information on one giant council database! Hang on a minute…!

Is it not obvious to all that this is fundamentally wrong and open to misuse?

Sample questions and potential answers are being used in Named Person training sessions to teach state officials how to subtly draw out information from children, interpret the answers, record it on a database and identify potentially ‘at risk’ kids.

One such system called “What I Think” has been developed for use with children from nursery up to age 8. Officials can select information from conversations with the child, and also drawings, photographs and recordings.

In the training Named Persons are encouraged to obtain information in a ‘natural’ way so that children don’t notice they are being questioned.

Sample scenarios designed to show Named Persons when a child could be deemed ‘at risk’, included a child not missing their mother when they stayed overnight at their granny’s, or a child being shouted at by their father after having an accident when playing alone in the park.

She told the Mail On Sunday: “The well-being indicators in this tool are clearly being used as a test of parents. They are not really about the child’s view, as there is no attempt to measure the child’s happiness or creativity.

“The examples given imply the nursery or school is a neutral place staffed by experts and the home is a hotbed of risk. In fact, most parents can tell you the stories that children bring home of shouting nursery workers, horrible, scary teachers and mean other children. Sometimes they just need to be heard and comforted and encouraged to see the other person’s point of view, although sometimes there is a need to act.

“But”, she commented, “parents don’t get to write down these people’s names and put them on a national database for other parents to have a good read, and add their own damning stories. Parents have to think very carefully about how to respond to what children say and how not to make things worse with a teacher who clearly does not like their child.

Maggie stated: “The examples given also encourage the teacher and key worker to record very positive things about themselves and not about parents. Would the key worker record that the child told them: ‘I hate you, you are mean’? Bias in key workers might be against parents who are poor, black, single, gay or posh… there is no warning of this in the guidance.

She warned: “The fact that these actually very biased and partial anecdotes will be going on a national database is extremely worrying and should make everyone sit up and say ‘No’. Overall, this is a crude tool with no validity – but it will be used and the information interpreted as evidence of child abuse or neglect.”

Dr Stuart Waiton, senior sociology lecturer at Abertay University, said: “A major problem with the Named Person professionals is that they appear to have lost any sense of the family as an important private institution for society. Trust, loyalty and privacy in their warped eyes are transformed into secrets being hidden ‘behind closed doors’.

He added: “Once we see every child as vulnerable and every family as potentially toxic, the result is that professionals see less of a problem with interfering in the private lives of children and parents.”

A NO2NP spokesman described the situation as ‘creepy’, and warned: “Psychologically manipulating youngsters so you can squeeze confidential information out of them is fundamentally wrong – but to store all this information on a giant council database is astonishingly foolhardy.

He added: “Parents are going to have to tell schools and local authorities to stop spying on their children. It really is beyond time that the Scottish Government called a halt to this whole charade before they do any more damage. It’s Orwellian, it’s immoral and it has to stop.” 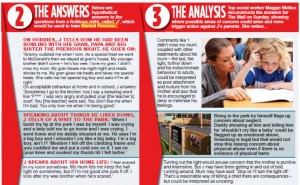