When Deputy First Minister John Swinney recently told concerned parents he would not be holding public meetings to listen to their objections to the Named Person scheme, NO2NP volunteers were not discouraged. If he would not come to them, they would go to him and his team on their roadshow on education governance. 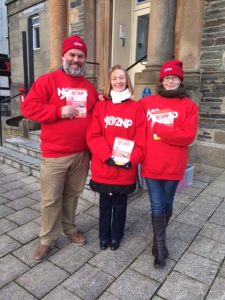 Wherever it went – Dumfries, Glasgow, Perth, Aberdeen, Inverness, Dunoon – local NO2NP volunteers turned up, whatever the weather, to give out flyers (called Let Teachers Teach) that specifically addressed the issue of these roadshow events. (Oh, we were in Edinburgh too, but you can read about that here.)

What’s the connection between education governance and the Named Person scheme, you may ask? Well, John Swinney is on record saying “I have been taking measures to simplify and clarify the experience of teachers and reduce the burden of bureaucracy.” Great news!

So does that mean he’s scrapping the Named Person role for head teachers, deputy heads, guidance teachers and others, already overstretched with admin? Sadly, no – it’s “business as usual”, as the Scottish Government presses ahead with its discredited and unpopular scheme across Scotland. How will it be possible for teachers who are Named Persons to have reduced bureaucracy when the role of a Named Person will increase that bureaucracy exponentially? 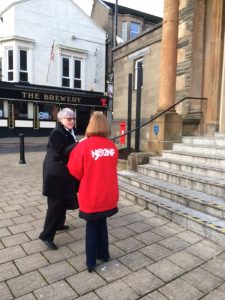 Our volunteers spoke with a number of people who attended these roadshow events. Here’s a sample of what was said:

“I don’t like the sound of that!” – Businessman, Glasgow

“It’s okay, you don’t need to persuade me, I’m all signed up!” – NO2NP supporter, Perth

“Hello to the Campaign of the Year!” – Mother, Perth

“It was a waste of time and not what we had expected. We were put into groups to discuss the proposals which the Scottish Government intend to implement regarding the Named Person process, which head teachers etc have already discussed and raised objections to. Civil servants were taking notes.” – Head Teacher, Highland

We also heard from someone who attended the Aberdeen governance event, who said his table agreed that the Named Person’s responsibilities would increase bureaucracy. 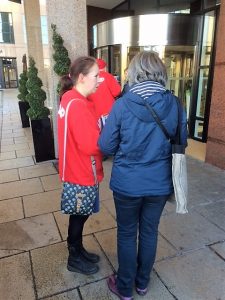 As 2016 comes to a close, can we take this opportunity to say a huge thank you to all our tireless volunteers for all your hard work over this past year, delivering flyers, displaying car stickers, raising the campaign’s profile online, writing to papers, attending Action Days in all weathers – all your efforts have paid off! We couldn’t have done it without you! Thank you!