A cold February Saturday morning didn’t deter the hardy NO2NP volunteers who came out to let Falkirk’s shoppers know why the Named Person scheme is a worrying development for every family in Scotland. 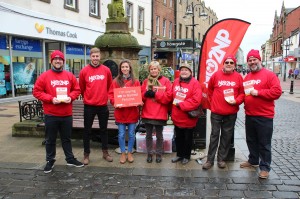 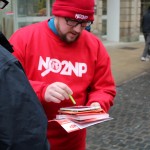 Time and time again, our volunteers found that people were completely unaware of the scheme, which shows how important it is for all of us to do what we can to let our friends and contacts know! If you’re on Facebook or Twitter, let your friends know, using #NO2NP or no2np.org. And if not, let them know when you next see them. 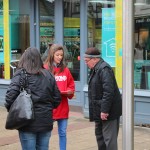 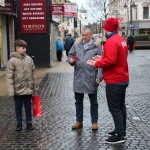 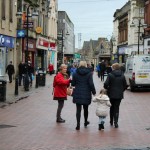 Once local folk were told about the scheme, they were horrified and couldn’t believe that the Government would interfere so much in family life. One man said “It’s like the Government thinks that parents are too lazy or too dumb to do their job, so they bring this in! Why?!?” 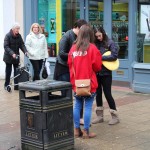 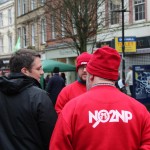 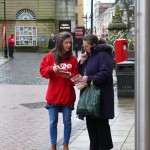 One teacher we met was completely against it, saying she had enough work to do preparing for and giving lessons, without an additional mountain of bureaucracy to be added to her workload, while a retired local Government officer said that there was no need for such a scheme.

Many of those who took the leaflets either signed the petition or promised to do so when they got home (it really was cold!), while others took additional leaflets to pass to family members.

The NO2NP Roadshow crosses the River Forth to Dunfermline tomorrow for its next stop at the Pitbauchlie House Hotel at 7.30pm – if you live in the area, please come and join us and invite your friends too!