On the penultimate Saturday before Christmas, most people are out buying their Christmas presents, but after a well-attended roadshow in nearby Prestwick on Tuesday night, a dedicated group of local NO2NP volunteers were out and about on Ayr’s High Street. Their enthusiasm knew no bounds and they weren’t going to let a bit of rain stop them, as they handed out NO2NP leaflets and encouraged shoppers to sign the online petition, which now stands at well over 16,000! 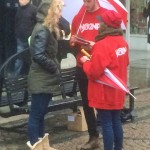 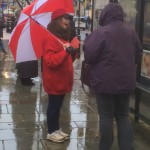 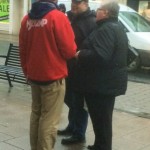 Our volunteers were encouraged to learn that a number of locals were not only aware of the campaign, but had already signed the petition – indeed, one lady who had done so asked for some flyers to give to her friends, so they could sign too!

Another lady who spoke to the team was involved in social work and she and many of her colleagues, as well as many teachers she knows, were all against the Named Person scheme.

One local shop owner expressed her thanks for what the NO2NP team is doing, while many busy shoppers promised to sign the petition when they got home out of the rain!

The latest NO2NP Action Day showed that, come rain or shine, our supporters are still happy to be out on the streets, armed if necessary with their NO2NP brollies, to let people know about this unpopular and unnecessary scheme – as one of our volunteers put it: “a state guardian for every child in Scotland”. Yet again, we found on Saturday that, once people know what the Named Person scheme is about, they are opposed to it. 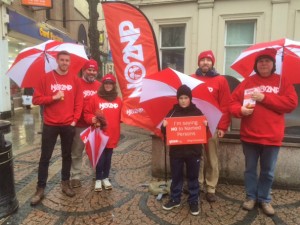 The NO2NP Roadshow will be taking a break now over Christmas and New Year, but we have several more events and Action Days planned for 2016 – watch out for one near you!