The Guardian newspaper reports that First Minister Nicola Sturgeon is laughing off ‘big sister’ criticisms of the Named Person scheme.

Sturgeon tweeted “LOL” in response to a cartoon and article in the Spectator magazine depicting her as ‘big sister’ and referring prominently to the Named Person scheme.

A spokesman for NO2NP said the Named Person scheme was a “massive infringement of civil liberties, human rights, and involves a huge amount of data sharing”.

He stated: “There are several glaring problems with the Named Person scheme which the Scottish Government has so far failed to address or even admit.

“It is a mandated intrusion into family life and the grounds for intervention are set at the alarmingly low level of ‘wellbeing’ rather than welfare.”

He added: “There is also the disturbing prospect that appointing a state guardian for every child will massively overburden the social care system, leading to vulnerable children being missed.

“Identifying at risk children is already like looking for a needle in a haystack – the answer to the problem cannot be to make the haystack bigger.”

The Guardian also reported on our NO2NP volunteers handing out campaign leaflets to delegates going into the SNP Conference in Aberdeen, where the First Minister is due to speak for a second time tomorrow afternoon. 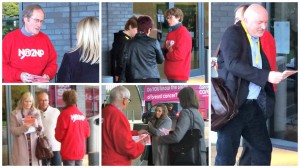