Named Person plans are a threat to every Scottish family

A columnist for the Scottish Daily mail has written extensively on why the Named Person plans are unwise, unlawful and unfounded.

John MacLeod said: “Many fear that the named person could have too much power. Others wonder about implications under the Data Protection Act or the terms of confidence. How much might lawfully be kept from parents?”

He continued: “just one of the details that makes the named persons scheme such thoroughly bad law is how it ensnares every child in the country, not just those already known to be at risk or of which, in that weasel term, ‘social services are aware’.

“Indeed, a strong argument in itself against the plan is how it will dangerously overstretch public resources and officials: that truly vulnerable, seriously abused youngsters will be overlooked amid a tsunami of moans.”

MacLeod also referred to a similar programme to Named Person which was launched on the Isle of Man in 2010 where, “the world and his wife were invited to report even the slightest concern to children’s social care”.

He noted that: “It rapidly grew hard to retain or recruit staff as they buckled under a preposterous new workload. Families, meanwhile, resented needless intervention.

“A Tynwald committee in time pronounced that over-referral threatens the protection of children at significant risk of harm because of the difficulty of finding a needle in such a large haystack.”

He added: “By its very enacting, the new law undermines parental authority and the privacy of the home – to say nothing of clear EU law on data confidentiality and how freely sensitive information may be passed around the public sector.”

“The overwhelming majority of Scotland’s carers and parents do a perfectly good job of raising their children and the Scottish Government’s ongoing insistence that ‘the new scheme is very little different to what happens already’ immediately begs the question: why change it?”

MacLeod concluded that, “untold Scottish Government energy has been vested in this chilling new scheme – founded on the premise that you, as parents, may well be evil or at least grossly incompetent; that you must be monitored in time for the state to stop you.” 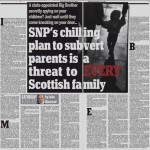