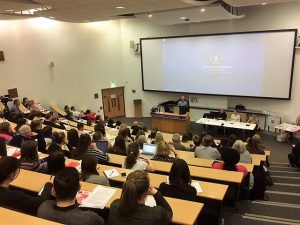 There was a packed audience in the University of Dundee’s Dalhousie Building on Monday night, when around 130 students, academics and members of the public came to hear a group of speakers on the subject: What’s wrong with the Named Person?

Chairman and NO2NP supporter Dr Stuart Waiton explained at the start that he had wanted speakers on each side of the debate, but despite extensive enquiries, he could not find a single person who was prepared to come and speak in favour of the Scottish Government’s flagship policy. 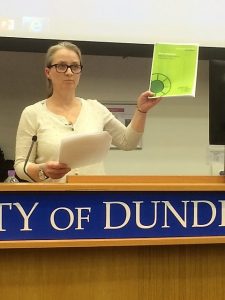 The first speaker, Lesley Scott of Tymes Trust, brought everyone up to date with the groundbreaking Supreme Court judgment from last July.

One of the most shocking paragraphs from the unanimous ruling said: “The first thing that a totalitarian regime tries to do is to get at the children, to distance them from the subversive, varied influences of their families, and indoctrinate them in their rulers’ view of the world.” (Paragraph 73)

The Supreme Court judges had noted that “wellbeing” is nowhere defined, adding that the SHANARRI indicators (standing for Safe, Healthy, Achieving, Nurtured, Active, Respected, Responsible and Included) “are not themselves defined,” and “in some cases are notably vague.”

“Yet,” Lesley went on, “practitioners up and down the country have been, and continue collecting information on ALL children and their families, on all aspects of their lives, in order to assess us against these undefined, vague, subjective measures.”

Thankfully, all five judges agreed that the idea that parents must comply with any advice given “could well amount to an interference with” Article 8 of the ECHR (the right to respect for private and family life). The Court also held that the legislation’s data sharing provisions, which they held were central to the role of the named person, “are not within the legislative competence of the Scottish Parliament”.

Addressing the Deputy First Minister’s reaction to the judgment in his speech to the Scottish Parliament, Lesley remarked that “Mr Swinney insisted that ‘the judgment itself does not require current policy to change … so my message to local authorities and health boards is a clear one – please continue to develop and deliver a named person service in your area…'”

“By pushing for the continuation of the named person provision and its information gathering and sharing processes,” Lesley concluded, “it seems that the Deputy First Minister is in danger of encouraging unlawful practice by state bodies.” 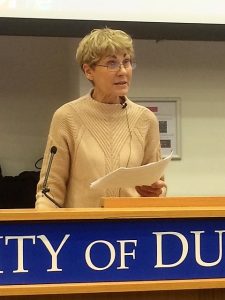 Next up was Dr Jenny Cunningham, a recently retired community paediatrician from Glasgow, who opened her talk by claiming that the named person scheme was “illegitimate and illiberal”. She argued that this is because a democracy depends on the principle that “parents ought to be autonomous in relation to their own families”.

“The underlying assumption is that adults are unable to identify vulnerable children – so the state has to intervene! ‘This belittles parents'”, she said.

Jenny concluded: “We should strongly resist and argue against this idea that parents are incapable of assessing children’s wellbeing needs and accessing services – parenting is about establishing good relationships with children and establishing parental authority.” 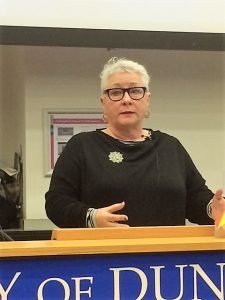 The final speaker, Maggie Mellon, an independent social work consultant, played a BBC news video from the late 1990s, where former Prime Minister Tony Blair argued for intervention in “problem families” – even pre-birth! – to ensure they would not become “a menace to society”. “So it didn’t start with the SNP at all!” Maggie quipped.

“It’s important that we understand the rationale and the ideas underpinning the legislation,” she said. “The government has made it clear it thinks the Supreme Court judgment is purely technical and they’re going to plough on ahead.”

She went on to remind the audience that there is no duty in the Act to consult or collaborate with parents: “It’s just not there. We’ve been treated to flights of complete fancy about the voluntary nature of the scheme. We were told it was in response to parents’ demands – then we were told it was to save children from their parents!”

Maggie concluded by saying “a Named Person can’t provide a hot meal, a pair of shoes, a warm home – but they can spend time doing SHANARRI wheels with 300 wellbeing outcome signifiers and 200 risk indicators! It doesn’t work.” 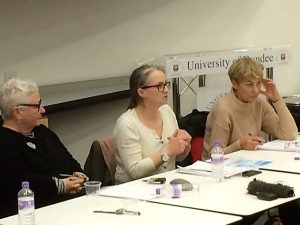 There followed a lively Q&A session – here’s a taste of it:
“It’s blurring the lines of when we decide when parents are failing in their responsibilities.”
“It’s a terrible piece of legislation – fatally flawed.”
“There’s lots of meetings and paper shuffling – but I’m concerned my son will not get the support he needs.”
“Everyone is identified as problematic, so children with real needs are overlooked.”
“Parents are the people who can hold the Government to account – but parents are under surveillance themselves.”
“Named Persons won’t love your children as much as you do.”
“We need to put power back in the hands of parents”

The message from Dundee was clear: there’s still widespread opposition to the Named Person scheme, so perhaps the Deputy First Minister will reflect on that fact?