The Scottish Daily Mail has revealed that the Scottish Government spent more than £100,000 on PR for the Named Person plans in recent weeks.

Taxpayers have paid the price for a series of events designed to promote the Getting it Right for Every Child (GIRFEC) scheme.

Around 600 people attended three regional events in Edinburgh, Glasgow and Perth, and the GETLive event at Hampden, where parents received £25 gift vouchers, as well as travel costs and catering.

A NO2NP spokesman described the move as a “fortune at a time of grim austerity”.

He added: “It’s an absolute outrage a government which is pleading poverty… can find this eye-watering amount of public funds to spend on PR for their own unpopular policy of state guardians.” 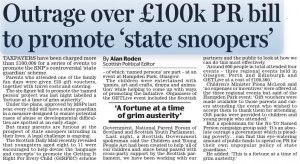