Primary school children have been taught to sing along to politically correct Government mantras in a new theatre production, entitled ‘Rights of the Child’, which has been touring Scottish schools over the last few months.

Songs include ‘SHANARRI song’ and ‘We’ve got the Right’, which the theatre company describe as “a great way to teach your pupils the UN Convention on Rights of the Child and remember the Wellbeing Wheel (SHANARRI)”. 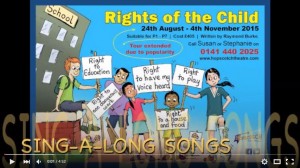 Glasgow-based Hopscotch Theatre Company said the tour was extended due to popularity and would reach approximately 28,800 children. Schools are paying £405 to host the production. There is expected to be a new run of shows after the Christmas break.

The play is described as the story of Ryan, a schoolboy who has no idea he has any rights, until he has a dream about being taken to the United Nations by rights campaigner Eglantyne Jebb to learn about the rights of children. Hopscotch concludes: “When he awakens, he understands the value of rights and returns to school determined to share his newfound knowledge.”

Hopscotch, which has received thousands of pounds of public money for the project, has also produced a 24-page teaching resource for schools to use in the classroom after children have watched the play.

The materials feature lesson plans designed to teach children the Scottish Government’s definition of wellbeing, but the nature of many of the lessons undermine parents and encourage children to think that love and care can be found in all adults.

‘Rights of the Child’ Teaching Resources

A NO2NP spokesman said: “There seems to be an astonishing lack of self-awareness from these people. This is not just bad art: it’s bad policy, bad education and poor safeguarding. What do they think they are doing encouraging children to see all adults as equally responsible for meeting their needs? Encouraging children to rely on strangers in the same way they rely on mum or dad makes them vulnerable.

“These people are damaging relationships between children and their parents with their right-on propaganda. People are already worried that the Named Person will undermine parents without this exercise in softening up children’s minds.

“This is achingly politically correct nonsense. When there are countries where girls are banned from going to school and boys are recruited as child soldiers, this attempt to use an international children’s rights convention to draw pupils into supporting unpopular Scottish Government policy is, frankly, repulsive.

“I’m sure touring Scottish schools with pro-Government propaganda is a great money-spinner. But whether it’s what tax-paying parents want is quite another thing. They say this will play to 28,000 children. I hope parents will tell schools they don’t want their children to have anything to do with it. Hopscotch should be told to hop it before they can do any more damage to family life.

“Who thought it was a good idea to teach children to sing the praises of Government policy? Don’t they realise how awful that looks? I think most parents would prefer their children to be singing nursery rhymes not Named Person mantras.”

Alison Preuss of Schoolhouse, a supporter of NO2NP, said: “Parents send their children to school to be educated, not indoctrinated, but here we have paid edutainers being welcomed into classrooms to promote GIRFEC propaganda and the belief among children that the Government respects children’s human rights when nothing could be further from the truth.

“The Government has chosen to ignore all of the ‘inconvenient’ rights afforded by the UNCRC in order to progress its own authoritarian agenda, where state dictated ‘life journeys’ and outcomes for every child are misrepresented as ‘wellbeing’ rights. Imposing a compulsory Named Person on every child and sharing their personal information without consent is a blatant infringement of the right to privacy, just one of the rights that don’t figure anywhere in the state’s pick and mix version of the convention.

“By singing from the SHANARRI song sheet, the Hopscotch Theatre Company may have found favour with the Government, and a lucrative income from schools while local arts groups fold due to lack of funding, but parents should be aware that this programme is one of social engineering, not education and certainly not children’s rights.”

Hopscotch, in response to a question about whether the play was designed to lay the ground for the Named Person scheme, confirmed by commenting: “Yes, this is everything we’re kind of hoping to achieve. It’s been so successful that we’re bringing it back for a three-week tour in February. We have schools on a waiting list.”