Information watchdogs have been criticised over disparaging comments made in emails when the Scottish Government lost the Named Person legal case. 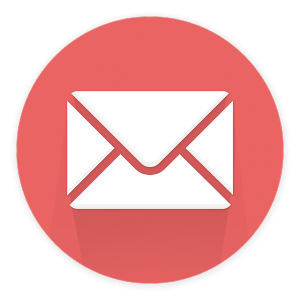 A senior Information Commissioner’s Officer (ICO) official admitted to a colleague in Scotland she hadn’t “the foggiest” what the historic court judgment was about.

The official, employed in the Cheshire headquarters of the ICO, went on to say that she didn’t have the “time or inclination” to read the decision of the UK Supreme Court, despite it being the biggest ruling affecting the ICO’s work since the Prince Charles letters case.

In response, her colleague David Freeland, a Senior Policy Officer at the ICO’s Edinburgh office emailed back saying: “I don’t particularly blame you”.

He also disclosed that the ICO was aware they could get complaints about information breaches following the ruling.

He wrote, “we may get complaints that non-statutory pilot schemes were either sharing personal information unlawfully by lacking sufficient conditions for processing, or disproportionately”.

In 2014 Mr Freeland controversially told a seminar on information sharing not to offer parents the chance to object to the sharing of private information on them and their children: “Consent is not the be-all and end-all”, he said, lamenting that “Consent can be difficult and it should only be sought when the individual has real choice over the matter”.

The internal emails, revealed in a recent Freedom of Information (FOI) request, also disclosed concerning comments from the head of the ICO in Scotland, Ken Macdonald, who expressed his “disappointment” after judges struck down the Named Person scheme’s intrusive information sharing provisions. The ICO is responsible for protecting the privacy of citizens and upholding the Data Protection Act – the very law the Supreme Court said was breached by the Named Person provisions.

The officials were criticised for their dismissive comments by NO2NP spokesman Simon Calvert, who said:

“The attitude on display here is breath-taking. Are these people so out of touch with the concerns of ordinary families? There’s been massive public anxiety about the Named Person data sharing, yet they say they are ‘disappointed’ when the Supreme Court sides with families and upholds the Data Protection Act.

“The ICO as an independent body has been entrusted to uphold information rights, oversee data protection and investigate complaints from members of the public. Yet here we find ICO officials behaving in a most dismissive manner about a court case which goes to the heart of their work and has profound implications for personal privacy and data protection. It may be the most important case on Data Protection that Scotland has seen, yet officials charged with Data Protection in Scotland don’t seem to think it’s important enough for ICO officials to even bother reading.

“This is the kind of conversation that goes on when officials don’t think the public are listening. It is disturbing that this kind of culture exists within the ICO. Perhaps there should be a review to address the problem.”

“The comments by Ken Macdonald suggest the ICO is only paying lip service to the idea of being an independent body. They say they are disappointed with a court ruling against the Scottish Government in an action brought with the backing of thousands of ordinary mums and dads concerned about their family privacy. If they were truly independent they would simply accept the ruling.

“The ICO got the law wrong. They failed to protect the public. They should have warned the Government, not collaborated with them. In the wake of the recent court decision to award legal costs against the Government, Mr Macdonald might wish to revisit his views.

“It should also be noted Mr Macdonald has recently had to withdraw flawed advice given to public bodies about the Named Person scheme in light of the decision by the judges.” 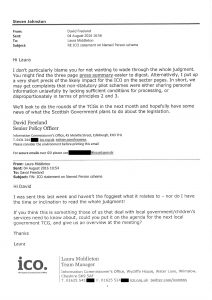 The ICO is the UK’s independent body set up to uphold information rights and also oversee complaints about freedom of information requests.

Ironically, the emails about the Named Person scheme were obtained by a Freedom of Information request forcing the ICO to make public all their emails on the subject.

The response also reveals there was concern within the Scottish Government before the judges banned them from implementing the Named Person scheme.

Ken Macdonald, Head of ICO Regions, who leads ICO Scotland and was involved in advising the Scottish Government on the issue, wrote an email to Maureen Falconer on 27 July 2016 – the day before the judgment – stating (page 15):

After learning the court verdict, Ken Macdonald wrote in an email on 28 July 2016 to the Wales ICO regional manager and the Deputy Chief Executive (page 14):

Scotland’s ICO chief clearly did not understand the ruling, or even how Parliament operates. The “six weeks” was the time given by the court to allow the parties to make submissions to the court over costs and other issues. It would have been impossible to reconvene Parliament from its summer break and pass new legislation in six weeks.

Another email, from Anya Burgess, Lead Communications Officer, sent to the UK Information Commissioner, the Head of Policy Delivery at ICO and the Deputy Chief Executive on 28 July 2016 stated (page 9):

In another email David Freeland, Senior Policy Officer at the ICO, emailed Laura Middleton, a Team Manager on 4 August 2016 (page 17):

“What we can see here is anything but independence. This is a one-sided attitude, determined to stand by the Government line, with little regard to the needs of the public or even the actual demands of the law.

“It would seem the ICO is in need of a reminder of its duties and obligations to the people that pay their wages. Action must be taken urgently. Otherwise, how can we be confident they will uphold and enforce the Supreme Court ruling in cases where public authorities have breached privacy law in pursuit of the Named Person scheme? How can we be sure they’ll even read it?”