NHS Lothian: ‘we don’t have the staff to cope with Named Person scheme’

One of Scotland’s biggest health boards, NHS Lothian, is facing serious staff shortages and admits it is unlikely to be able to meet the extra demands of the Named Person scheme when it is rolled out later this year.

Nursing leaders have raised “significant concerns” warning that “health visitors – who will be the named person for children under five – are already under serious pressure”.

It is reported that the health board is unlikely to have enough staff until at least 2018/19 because of an existing 19 per cent vacancy rate, which increases to 44 per cent in Midlothian, according to recent board papers.

Chief executive Tim Davison told a board meeting last month: “If we simply can’t get enough health visitors then we may have to look at how the service might look like in future, where people from other places might assist with child health.”

Mr Provan added: “What the board cannot and must not do is ask the current workforce to take on more to meet the requirements of the named person legislation without sufficient resources to do this safely.”

NO2NP spokesman Simon Calvert, said: “NHS Lothian say it will be impossible to meet the massive demands of the new scheme for two or three years at the earliest without pulling health visitors from other areas which, presumably, will be just as overstretched.

“No-one doubts the good intentions of the government, or of health visitors, but the Named Person scheme is a bureaucratic, data-harvesting nightmare which will go badly wrong.” 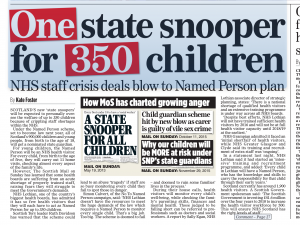 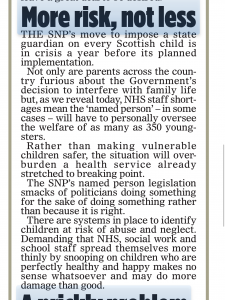 Families will be under “surveillance” as new Government guidance reveals that health visitors will make a record 11 home visits to monitor not just the health and development of a baby, but also a range of personal details about parents, including finances and mental health.

Under the Named Person scheme health visitors will also act as a Named Person for 0 – 5s, and this latest 64-page document published last week discloses an extensive checklist by which families should be ‘assessed’ during the visits.

The Scottish Government’s £41.6 million Universal Health Visiting Pathway Scotland: Pre-Birth to Pre-School programme sets out a strict schedule of 8 visits within the child’s first year and 3 between 13 months and 5 years, with each visit lasting up to an hour and a half. 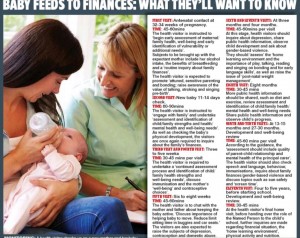 A NO2NP spokesman said: “Much of this is gobbledygook. But, alongside the talk of ‘Health Plan Indicators’, ‘salutogenic approaches’ and ‘human ecology’, some things come through loud and clear.

“Firstly, this calls itself a surveillance programme – how could 11 visits by the age of four with questions about family finance, TV time and sun cream use be considered anything else?

“Following this guidance threatens to turn health visitors into family managers. And health visitors will be typing up a wide range of extremely private information into a state database.

“Secondly, consent is not required for information sharing with or by a Named Person to promote ‘wellbeing’, even where there is a duty of confidentiality. The document says consent shouldn’t even be sought in case it’s refused and the parent-health visitor relationship is damaged. Fundamental principles of consent are being thrown aside, which is what we’ve been saying all along is part and parcel of the Named Person scheme.”.

Liz Smith MSP said: “This completely undermines the trust within family relationships and is exactly the reason for the increasing fears about the Named Person and the nanny state.”

Theresa Fyffe, Director of the Royal College of Nursing Scotland, said the plan would “help children and their families get support if they need it”, but added: “However, we have significant concerns about implementing the Named Person scheme.”

A recent report on STV News (13 March) has highlighted “chronic recruitment problems” for health visitors in the Western Isles.

It is expected that health visitors in Scotland will take up the controversial ‘Named Person’ role for younger children, potentially leading to an increase in their workload.

“Child and baby health visits have been suspended in the Western Isles over chronic recruitment problems. Weekly postnatal visits, health assessments and some child planning meetings have been shelved, among other services. NHS Western Isles has suspended the non-priority services until it can recruit two more full-time health visitors.

“Associate chief operating officer, Colin Gilmour, said: ‘We are experiencing ongoing difficulties in recruiting to our health visiting vacancies and are making every effort to ensure that posts are filled as soon as possible.’”