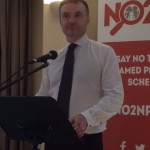 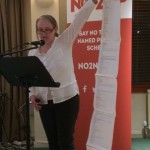 The latest NO2NP Roadshow event was held on a beautiful, sunny evening in Galashiels last night.

Gordon Macdonald, who is CARE for Scotland’s Parliamentary Officer, spoke first. He said that the family is the fundamental unit in society and, as such, deserves respect. This respect for the family is “integral” to key human rights documents, but we have seen a reinterpretation of them in recent years which marginalises parents. The Named Person legislation is a really significant shift away from child welfare to a wellbeing model that is very vague and broad. We are seeing a fundamental shift in the ideology of how the state relates to all children, he explained.

Next up was Lesley Scott of TYMES Trust, who as usual highlighted what the local authority for the area was doing about the scheme. Borders Council has devised a “Cootie Catcher” so that children can learn how to assess their wellbeing. The Council has also created a snakes and ladders type game called “On the trail of the Wellbeing Snail”, where cards are selected when a player lands on a square that determines whether they make progress or go backwards.

The notorious SHANARRI wellbeing indicators of safe, healthy, achieving, nurtured, active, respected, responsible and included are key to this game and are intended to show children when a “wellbeing outcome” has been achieved. Examples included whether a parent had washed their child’s gym kit the night before and whether a parent had listened to their child if they were upset.

Lesley went on to explain the Wellbeing Wheel, the My World triangle, the Resilience Matrix and Genogram, all part of the Scottish Government’s “toolkit” for assessing, analysing and addressing every child’s perceived “wellbeing” needs.

After Nigel Kenny from The Christian Institute brought everyone up to date about the judicial review appeal to the Inner House of the Court of Session last week, there was the usual lively Q&A, when those who had come raised a wide range of concerns about the scheme.

The NO2NP Roadshow will be calling at the Gracefield Arts Centre, Edinburgh Road, Dumfries next Wednesday, 17th June at 7.30pm – we look forward to seeing some of you there! 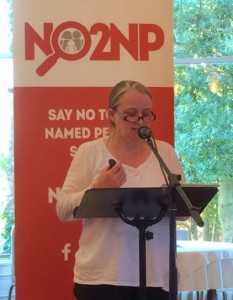 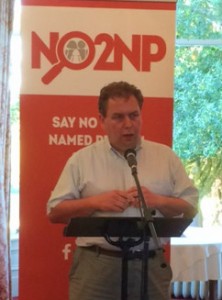 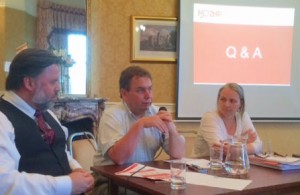 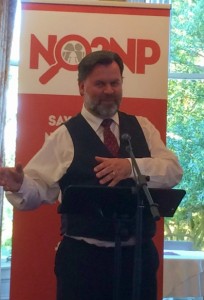 Campaigners opposing the Named Person scheme are back in court today for an appeal hearing after their legal challenge was rejected last year.

Lord Pentland rejected arguments that MSPs had exceeded their powers, breaching human rights rules and data protection laws, in a Judicial Review aimed at having the legislation overturned.

The legal action is being brought by The Christian Institute, CARE, TYMES Trust and the Family Education Trust, with the support of academics and individual parents, all of which support the NO2NP campaign.

Community Law Advice Network (Clan Childlaw), a charity that provides legal help for children, also raised concerns about the scheme and announced it will intervene in the case.

Simon Calvert of The Christian Institute, said: “We’re asking the court to make a ruling that the imposition of a Named Person on every child in Scotland is unconstitutional and a breach of the right to a private family life.

He said they wanted the “court to look behind the Government’s rhetoric and see how this is not about protecting vulnerable children. It is about making the state a co-parent, with power to second-guess and over-ride parenting decisions about what makes a child happy. It’s Government-approved-parenting writ large”.

He added: “The trigger for intervention by the Named Person is not where there is a ‘risk of harm’. The threshold at which the Named Person can intervene in the lives of Scottish families is merely the ‘promotion of well-being’.

“The Named Person is, in effect, legally empowered to police the happiness of Scottish children. He can access and share their confidential medical data, their school records, he can question children and give them advice and supply services to them without their parents’ consent – all on the basis of what he thinks is most likely to make them happy. That is an outrage. Thousands of people across Scotland know it is an outrage, and that’s why they’ll all be hoping our judicial review succeeds.”