AND NOW FOR THE NAMED PERSON PANTOMIME – OOOOH YES IT IS! 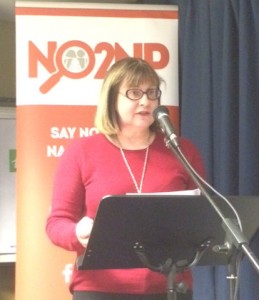 An extract from a talk by Alison Preuss of Home Education Forums, given at the Prestwick Roadshow on 8th December 2015.

Since it’s pantomime season, I thought I’d run through a few weel-kent lines (known as “messages” in government circles) from our favourite SHANARRI characters – audience participation is welcome!

Scottish Government: “Parents asked for a Named Person”
Audience: (All together now!) “Oh no they didn’t!”

Only a small subset of families in Highland whose children had specific needs and disabilities and who had been serially fobbed off by “services” felt a single point of contact might be useful. So what happened next? A compulsory Named Person scheme was imposed on every child with no opt-out, allegedly “because parents wanted it”.

Scottish Government: “Nobody complained in Highland”
Audience: “Oh yes they did!”

Scottish Government: “The evidence from Highland showed GIRFEC to be a great success”
Audience: “Oh no it didn’t!”

The Highland pilot was nothing like what has been legislated for as it was small scale, voluntary and targeted, as opposed to compulsory and universal. When an equivalent scheme was adopted universally in the Isle of Man, it caused meltdown in social services due to an astronomical rise in referrals. It was quickly abandoned and its centralised database has since been declared illegal and switched off.

Scottish Government: “Engagement with the Named Person is not compulsory”
Audience: “But look out, he’s behind you!”

Although you may not need to engage with the appointed Named Person, the data held on your children and all other family members by the “services” you do engage with is fair game as they are obliged to pass it on, if there are any “wellbeing” concerns. As one parent said, her son’s teacher knew she was pregnant before he did.

The consequences are clearly set out if you don’t co-operate or have a different perception of an alleged “problem”. This is child protection jargon used by social workers dealing with children at risk of significant harm, but has been hijacked to accommodate a much lower intervention threshold based on wellbeing concerns defined by the government.

Scottish Government: “The majority of professionals and children’s charities supported the scheme.”

(This is where you get the chance to boo loudly!)

The loudest cheerleaders were vested interests who stand to benefit from providing monitoring or intervention services. They belong to the emerging “I Spy” generation of service providers, whose incomes depend on delivering government outcomes. Many of the “Cinderella” charities who are not funded (like Tymes Trust and Schoolhouse), parents’ groups like the SPTC and legal experts did not support the scheme, including CLAN Childlaw who have formally added their concerns about non-consensual data sharing to the legal challenge.

Once upon a time it was obligatory to undertake training to reach the required level of competence in, and certification for, a professional role such as teaching, midwifery, nursing or social work. These discrete professions are now disparaged as “silos” in the shared language of SHANARRI, where wheel-spinning is the only game in town and box-ticking the only qualification needed to assess wellbeing needs. So poor quality or downright dangerous decisions will be made by those without relevant professional assessment skills. We have already heard about teachers pontificating (sometimes dangerously) on health matters and housing officers proffering advice on education matters, with referrals being made on spurious grounds out of ignorance, arrogance or a combination of the two. No wonder child protection experts and the police are worried about the lack of focus on the most vulnerable children.

Scottish Government: “If it saves just one child.”

(This is the deadly serious pantomime finale)

When all else fails, the government and its cast of cheerleaders play the child protection card, but GIRFEC is not the answer when it comes to the deadly serious business of protecting vulnerable children which belongs with professionally qualified and trained social workers.

GIRFEC is actually having the opposite effect to that which was allegedly intended. It is deterring people from accessing services, since they know that their information is not going to be treated confidentially. Having dealt with a large number of parents who have had information gathered and later used as evidence against them, most are now exercising the right to remain silent. Booking in with the midwife used to be a happy experience, but is now an interrogation of every aspect of your life, including past relationships and family finances. And that is only the beginning of the intrusive data gathering which will continue throughout the child’s life.

I have recently been supporting a young mum who was being bullied by a multi-agency SHANARRI gang because she decided to home educate her child. Unknown to her, the Named Person had amassed huge amounts of hitherto confidential information on every family member and associated adult in a bid to trump up a whole raft of “concerns” about potential (not actual) risks to wellbeing in order to deny her choice. This included records on an estranged former partner, siblings and even a deceased relative, all presented at a hastily convened multi-agency meeting of complete strangers in the form of a report full of inaccuracies, hearsay and deeply personal information which left her feeling “violated” and “humiliated”. It became a bitter power struggle, with the education tail wagging the social work dog and insisting on assessment without grounds (essentially wasting the social worker’s valuable time). All because a Named Person happened not to approve of a parent’s lawful educational choice. So much for the helpful point of contact whose services you can supposedly decline.

I’ll finish with a wee anecdote of my own. Last week an annual tax summary arrived through the post from HMRC addressed to my husband, reporting his earnings for 2014/15 as £38673.30 and the tax and NI he had paid as £9024.72. You may be wondering why I would be sharing this sort of personal data with a bunch of strangers after all I’ve had to say on the subject, but it may make sense when I tell you that my husband has been dead for more than two years. The data on the database is completely wrong! At least it wasn’t a tax demand, but it still caused distress.

Almost as much distress as the letter sent to him last year urging him to vote a particular way in the referendum by a campaign group illegally using details from an old electoral roll. They never even bothered to acknowledge my complaint, let alone apologise. I have yet to tackle HMRC, but sometimes it’s best to let sleeping data collectors lie, no matter how inaccurate their sources!

The data mountain is increasing exponentially, a bit like Jack’s beanstalk (which grew and grew from Jack McConnell’s original integrated services and early intervention beans). Let’s chop it down to size, kill the Giant Database State and take the Big Ugly Sisters SHANARRI and the Named Person with it!