The Dean Suite of Kilmarnock’s Park Hotel was full on Wednesday night for the latest stop for the NO2NP Roadshow. We even had a journalist and photographer from a national newspaper turn up! Word about our roadshow events is certainly getting around. 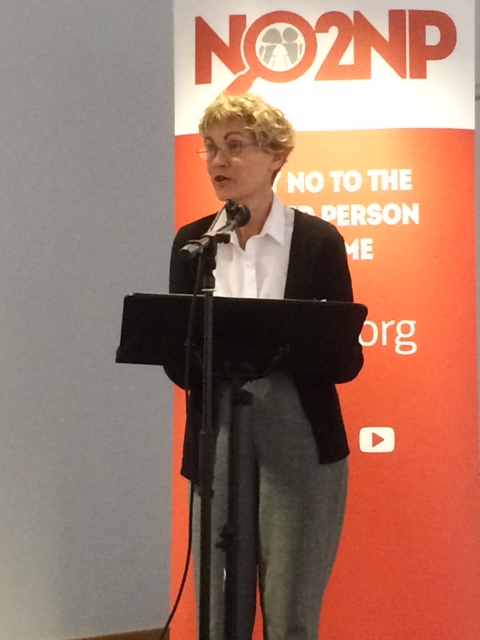 After a video was shown from last week’s Question Time in Aberdeen (where the Named Person was discussed), community paediatrician Dr Jenny Cunningham gave the first talk. She said that a child’s wellbeing (something nowhere defined in the legislation) is going to be assessed and judged, not by parents, but by health visitors, teachers and social workers.

Jenny continued: “The assumption is that parents are incapable of ensuring their children are safe and healthy and happy – and incapable of accessing the various services without the assistance of a third party.” She also expressed her concern about information sharing with various agencies and third parties and the creation of a central database: “Who controls it? Who can access it? What will happen to all the information on it?”

She finished by saying that the Named Person scheme “undermines, not supports, parental authority. Parenting is not some formulaic prescription of right and wrong practices: it’s all about parents’ relationship with their children”. 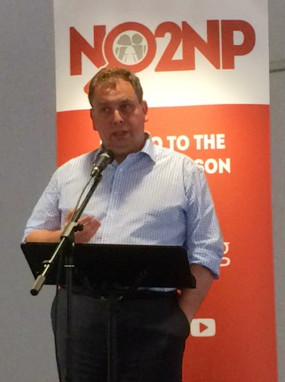 Next up was Dr Gordon Macdonald, CARE for Scotland’s Parliamentary Officer. He explained the reasons behind NO2NP’s opposition to the Named Person scheme, which are really threefold. First, it’s universal in its nature – it’s not just for a few vulnerable children and there is no opt-out – and no opt-in either. Secondly, it’s about the nebulous concept of wellbeing, not welfare (which is defined in law as significant risk of harm or neglect). Wellbeing is much harder to define, indeed there is no definition of it in the Act. And the third reason is the widespread data sharing that will take place, for which there is no opt-out. Despite Nicola Sturgeon’s assurances that the scheme is not mandatory, the data sharing aspect will be universal and compulsory, with no consent required for the sharing of personal and sensitive information.

Gordon’s children’s school recently sent him a letter which said: “It is our practice to share information”, which is far removed from the legal requirement of “strict necessity” for such information sharing. If parents refuse to cooperate, then that itself becomes problematic. Gordon went on to say that the ideology behind the scheme is that children’s groups see children as being fully autonomous, when in fact they are not. 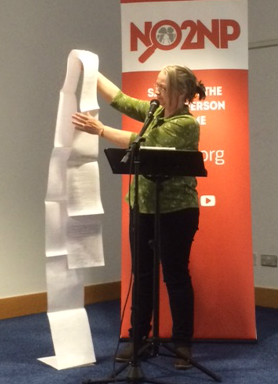 Lesley Scott from TYMES Trust then spoke about the fact that children and young people must show progress in the eight areas of wellbeing (SHANARRI) in order to be assessed as doing well now and in the future. But even supporters of this scheme cannot find the words to explain the concept at the heart of the Named Person. Lesley went on to say that “in East Ayrshire you are part of the AYRshare model for health and social care collaboration.

NHS Ayrshire and Arran along with North, East and South Ayrshire Councils have access to shared files which are created by practitioners based on a child’s NHS number. ‘At the push of a button’ practitioners can ‘push’ information on to AYRshare. Police are also on AYRshare and there has apparently been a successful test in Dalmellington involving GPs, pharmacy, health visitors and education – this trial is being extended to Loudon.”

Lesley had referred to a chronology of a child’s life that health visitors will use and this timeline of ‘significant events’ is one of the documents that will be shared through systems like AYRshare. “But what is a ‘significant event’?”, Lesley asked. She then produced another ‘non-exhaustive’ guide from the Government, which includes:

• Positive or negative changes in family circumstances, e.g. housing, birth of a sibling, emotional wellbeing
• Childhood illnesses
• Dates of immunisations and screenings
• Physical and mental health and wellbeing of child, parents/carers
• In Perth and Kinross, parental non-engagement is also classed as a significant event

In other words, she concluded, anything and everything will be logged – and shared. 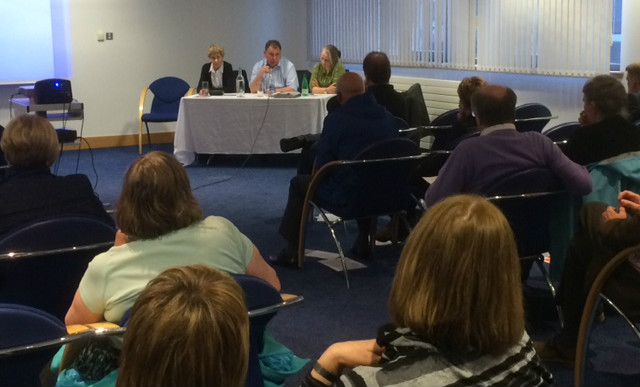 After showing a video about the history of the NO2NP campaign, Nigel Kenny suggested some ways in which people could be involved, before Dr Stuart Waiton from Abertay University hosted an extended Q&A.

Several people signed up as volunteers and a local team will be in Kilmarnock’s town centre this Saturday for our latest Action Day. If you live in the area, please come and say hello to them!