Arrogance will not persuade parents to back Named Persons

Civil servants are infamous for trying to spin statistics. But even the most cunning Government official would struggle to ’emphasise the positives’ in recent public surveys about the Named Person scheme.

Last month, a ComRes poll commissioned by The Christian Institute found that almost two-thirds of Scots believe the Named Person is “an unacceptable intrusion into family life”. Only 24 per cent – less than one in four – think every child should have a state-appointed named person.

A YouGov poll commissioned by The Times, which asked a rather cuddly question about Named Persons who “look after the interests of each child”, still found that less than a third (32 per cent) of people support the scheme. Almost half (48 per cent) oppose it.

The stats vary slightly but the message is clear: when the public get a chance to have their say about the Named Person scheme, it’s obvious there is huge opposition.

So why is it that the Scottish Government’s website says:

“When we consulted about the Act, 72 per cent of respondents agreed with our proposal to provide a Named Person for every child and young person.”

The consultation on which they rely closed in September 2012. The ‘72 per cent’ were actually responding to the question:

“Do you agree with the proposal to provide a point of contact for children, young people and families through a universal approach to the Named Person role?”

Clearly the language of “point of contact” doesn’t begin to do justice to the powers Named Persons are going to have.

The forgotten 98 per cent

More recently, in June 2015, the Government published the outcome of a consultation on the guidance that accompanies the scheme.

The Government ‘summary’ of the consultation repeatedly highlights the views of “organisations”. By ignoring responses from members of the public they scrape together 55 per cent support for their Named Person guidance. Hardly a ringing endorsement.

But what is particularly shocking is that this required them to gloss over the fact that 98 per cent of responses from individuals (presumably including many parents) opposed it.

Look at this table produced by civil servants. The 98% is downplayed by the use of bold text. 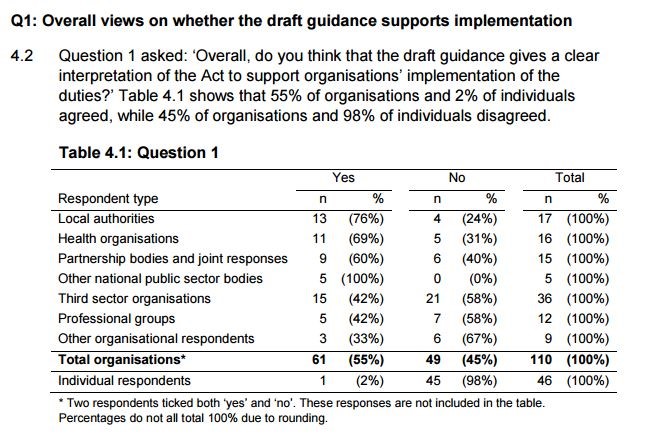 That’s what they think of ordinary public opinion.

Sadly Education Secretary Angela Constance recently confirmed this perception when, writing in The Sun on Sunday, she said that the scheme is “very widely supported by those best placed to know — namely, those groups who work directly with children and families”.

The Named Person is “very widely supported by those best placed to know — namely, those groups who work directly with children and families” – Education Secretary Angela Constance

You’ll never hear the Government claim widespread support from parents. And they’ll certainly never cite the 25,000 Scots who have signed the NO2NP petition. They prefer instead to invoke a handful of government-funded charities, some of whom will benefit from referrals made under the Named Person scheme.

But to say those charities are “best placed to know” beggars belief. Better placed than parents?

This is the kind of arrogance that makes parents so angry about the Named Person scheme.