Named Persons: Here for you – except when they’re not 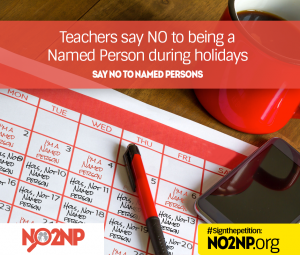 Teachers say NO to being a Named Person during holidays

The Named Person, we are told, “will be central to making the system work”. In trying to describe what a Named Person is, the Scottish Government explains that “The Act and supporting guidance sets out a clear set of steps for practitioners to follow to make sure the right information is shared at the right time, so that the right help is offered”.

“A Named Person”, it is explained, “will be available to listen, advise and help a child or young person and their parent(s), provide direct support or help them access other services.” Except of course if the Named Person has finished for the day and gone home – or it happens to be a weekend.

The Association of Scottish Principal Educational Psychologists developed Touchpoint Programmes at the end of 2014. These are “designed to be used by Strategic and Operational Managers tasked with the implementation of the Children and Young People (Scotland) Act 2014” to assist in preparing guidance for practitioners.

This document states that “there is no intention that the Named person service will be available out with working hours”. And yet the rationale persistently put forward for GIRFEC and the Named Person – indeed, the justification for it in the face of increasing opposition – is the potential for early intervention.

Given that the out-of-hours ‘service’ is only designed for “matters requiring urgent attention and action”, which are dealt with through existing Child Protection procedures, the Named Person is apparently not involved in such situations at all.

Recently the Educational Institute of Scotland (EIS), the country’s largest teaching union, came out and said that its members would not fulfil the duties and functions of the Named Person service at weekends or during holidays.

So the Named Person service, even though it is apparently “central to making the system work” is only available within working hours. Detecting those early wellbeing concerns to initiate early intervention will all conveniently be picked up between 9am & 4pm, Monday to Friday.

The right time to access the right help is not decided by the needs of the child but rather the contractual working hours of the Named Person.

Named Persons – there ‘if you need them’ – except of course if it’s before 9am, or after 4pm, or on weekends or half term, Easter Break or Christmas or…