As part of Declarationfest’s human rights conference at Glasgow’s Centre for Contemporary Arts last week, the question of the impact of the Scottish Government’s controversial Named Person scheme on families’ right to privacy was discussed at a lunchtime seminar on Thursday. 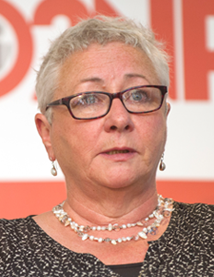 A representative of the Scottish Government had been invited to represent the case for the increasingly controversial legislation in a panel discussion with NO2NP campaigner Maggie Mellon, but despite several weeks’ notice, no one from the Government was available.

Given the widespread criticism of the Named Person scheme in three national newspapers over the previous weekend, one would think the Scottish Government would have made every effort to ensure that its side would have been heard, but the Government seat remained empty.

This meant that Maggie, an independent social work consultant and commentator, had quite a lot of time to explain the many problems with the scheme, as well as giving the audience plenty of time to ask questions, which they were very glad to do.

Maggie kicked off by explaining that despite the benevolent intentions that the Government and its supporters claimed for the scheme, a central problem was the dominant focus on child protection rather than on family and community support. The legislation makes no mention of consultation with parents or with children who may be in need of support and help, but instead explicitly sets out the power of Named Persons to ‘do as they see fit’ in response to concerns that they or other professionals may have about a child. Therefore rather than being an optional support for children and parents available at their request, the Named Person scheme will instead monitor rather than support parents

One of the key points Maggie put across was that needs are now being used as a measurement of risk, and that the insistence on child protection has changed the whole relationship between services and families, from providing help and support to monitoring parenting with a view to risk management. While universalism in services such as education and health is welcome, the universal imposition of Named Persons as a child protection measure threatens the right to private and family life.

The focus on parenting need fits with what has become a convenient dogma in Governments north and south of the Scottish border – that it is poor parenting rather than poverty and inequality that is at the heart of unequal outcomes for children. This at a time when poverty is affecting many children and families and inequality is increasing. In addition there is a failure to recognise the importance of the unique strengths and roles of families for the wellbeing of children, instead assuming that professionals are better judges of what a child needs than families.

There was an extended Q&A, during which a broad range of issues were raised. These included:
• The failure to recognise the rights of children to privacy and to confidential advice;
• Whether Named Persons would be told of medical treatment of children including teenagers even where parents were not informed.
• How many Named Persons a child might have before the age of 18?
• How many Named Persons a family might have to deal with in addition to all the other professionals?
• The increasing use of pseudo neuroscience to justify the removal of infants at birth from mothers.
• The costs and consequences of the Named Person scheme compared to providing services currently being cut?
• Whether Named Persons would be held responsible for any child deaths or injuries?
• How teachers would be paid for giving up holidays and weekends?
• Who would be the Named Person in the long summer holidays?
• Why the scheme was supported in the first place? Did no party see any flaw in it?

Maggie explained that there was widespread opposition to the Named Person as the Bill was going through Holyrood and significantly, The Law Society of Scotland, the social work professional association and many others had been against the scheme, but the Government chose to rely on the enthusiastic support of some major children’s charities.

• Whether the scheme is optional as the Government has said.

Maggie explained that she believed that if parents said they did not want a Named Person involved in their family’s affairs this would inevitably be regarded as a risk and would move the family into child protection investigation – if parents then agreed to a Named Person this could be viewed as “disguised compliance” and also seen as evidence of risk. In effect nothing short of enthusiastic compliance by parents is expected. Spanish Inquisition state of affairs!

One audience member pointed out that the children’s rights charity Clan Childlaw was very concerned about the issue of vulnerable children being able to share confidential matters with professionals without that confidentiality being breached. Clan Childlaw have been allowed to intervene in NO2NP’s judicial review appeal at the Supreme Court next week and to address the court on their concerns.