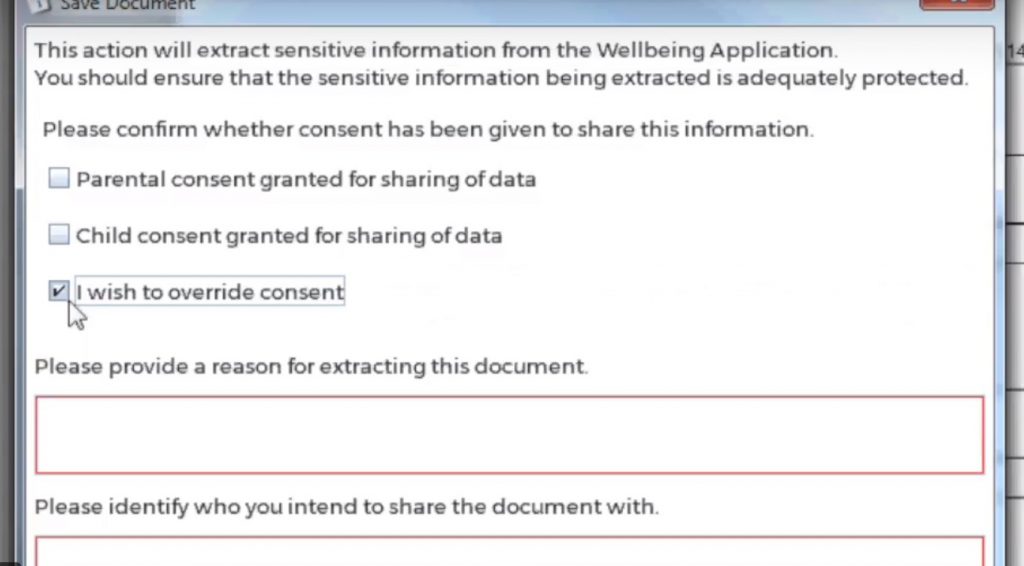 It’s 2014. The Children and Young People Act has made its way through Holyrood and the Named Person scheme is on the books, coming into force in August 2016.

Across the country, state snoopers are already recording and sharing sensitive information in pilot versions of the scheme.

The horror stories begin, the NO2NP campaign is formed, and the Government is taken to court.

To facilitate the operation of its statutory scheme, the Government needs a database which allows state snoopers to record, access and share information on children and their families.

Enter SEEMiS – the software company owned by Scotland’s 32 local authorities and behind their existing databases – which develops the SEEMiS ‘Wellbeing Application’.

This is subsequently signed off, and training of practitioners commences.

In 2016, the UK Supreme Court rules that the scheme allows for unlawful data sharing and infringes upon the human rights of families.

The scheme is halted, the data-sharing provisions are struck down, and advice from named persons must be presented as optional.

All well and good you say. Alas, it seems not. Last week we learned that the SEEMiS app, operating in Named Person pilots despite the Supreme Court judgment, tells users to “override consent” as a matter of course.

A video tutorial for the app told practitioners:

“To extract information you will have to qualify why you’re taking it out of the system. The system asks a user to confirm whether or not consent has been given to share information. By default, most of the time, you’ll be able to tick ‘I wish to override consent’. Otherwise, you’ll have to show that you asked for parental and child consent.”

Yes, you read that right: “override consent” “by default”. Avoid having to show that consent has been given. An eagle-eyed NO2NP supporter captured a screenshot of the tick box in question (above) and posted it on Twitter.

Several hours later, the video tutorial and associated guidance were deleted. This tells us that somebody, somewhere, knew the advice was in conflict with legal requirements.

But all of this raises a much bigger question: if the SEEMiS app is still telling non-statutory named persons across the country that they can override consent, is unlawful data sharing still going on?

And if so, what are the Government going to do about it?