The NO2NP campaign is calling on the Scottish Government to tell parents what additional steps it will take to vet Named Persons, in light of revelations that one of Scotland’s first official Named Persons has been found guilty of child sex offences.

Dayna Dickson-Boath held a senior position at a secondary school in Moray and served as a Named Person for 200 pupils but she has now been placed on the Sex Offenders’ Register and ordered to undergo treatment. 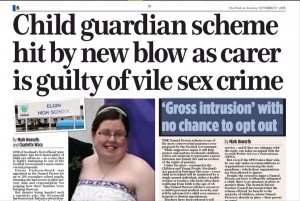 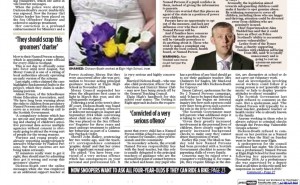 Sheriff John Halley, sentencing Dickson-Boath, said: “You have been convicted of a very serious offence which has consequences on your professional and personal life. It is very serious and highly concerning.”

Simon Calvert, NO2NP spokesman, said: “It has to be hoped that the local authority has begun an internal inquiry into how such a person could ever have been given such a powerful role in the lives of children.

“The Scottish Government must tell parents what additional steps it is taking to vet Named Persons. Given their greatly increased involvement in the personal lives of children, there clearly ought to be greatly increased background checks to make sure they cannot abuse that position of trust.’

The editorial concluded: “The best people to make decisions on behalf of children are parents. The state has no place in dictating how families should live their lives. Parents of children at Moray had no veto when Dickson-Boath was appointed their Named Person; they had no choice but to accept her into their lives.”

“Those parents will be horrified to learn of Dickson-Boath’s crimes. The rest of us might wonder how the Scottish Government will prevent further such cases when this wrong-headed policy becomes law across the country next year.”

Alison Preuss, of the Schoolhouse Home Education Association – a supporter of NO2NP, said: “We have long been warning about the risks to children from predatory Named Persons and this case should serve as a serious wake-up call to the Scottish Government.

“A compulsory scheme which has no opt-out and permits the gathering and sharing of children’s sensitive personal data across multiple agencies without consent is obviously going to attract the wrong sort of people for the wrong reasons. Parents and young people are already reporting inappropriately intrusive behaviour by Named Persons, but their concerns are not being taken seriously.”

Daily Mail reporter, Mark Howarth, cited the Scottish Parent Teacher Council which has insisted that the scheme offers ‘no benefit to the majority of children, whose Named Person is already in place – their parent or carer’.

He said: “Ironically, the legislation aimed towards safeguarding children could make it harder to spot genuine abuse. By widening resources to cover all children, including those who are happy and thriving, attention could be diverted away from children who are genuinely in need.

He also pointed to comments from Chief Superintendent Alan Waddell who said that the scheme could have an effect on Police Scotland’s “ability to accurately assess vulnerability”.