But the girl’s parents on the other hand would have no such right to know.

Aidan O’Neill QC, representing those opposing the scheme, told the five judges hearing the case that a GP would not be bound by any duty of confidentiality towards the girl.

Asked if a GP prescribing contraception to a teenager would have to tell the girl’s Named Person, likely to be a head teacher, Mr O’Neill said: “Yes and not be constrained by the duty of confidentiality.”

In the circumstances under the provisions he said: “There is no requirement to involve parents in these matters.”

And there was laughter from the bench when Mr O’Neill showed them Scottish Government guidance saying the Named Person would also have input into the diet of children as well as decisions on the decor for a child’s bedroom or the TV programmes they watch.

The QC said campaigners were objecting to the compulsory nature of the scheme which does not allow any opt-out for parents.

He told the judges they had a duty to “enforce and police” the limits of the Scottish Parliament.

He also said the Named Person scheme meant they would be given rights and duties to carry out functions normally carried out by parents adding: “It is going beyond the state’s role. The state is not the totality.

And he said the state “should not undermine the family”.

Asked by Baroness Hale what might happen if a Named Person expressed concern about parents smoking in the family home where there were children present, the QC said the Named Person could bring in health visitors and social workers with the matter possibly being escalated to a multi-agency matter and a child’s plan drawn up to deal with the matter.

Criticising the data sharing involved in the Named Person scheme where personal information is shared between different agencies, he expressed frustration at the confused wording of the legislation and said: “This has been doing my head in. It’s like wrestling with an octopus.”

And he said the Scottish Parliament and those drafting the legislation had failed to consider European law in the process.

The legal challenge is being brought by a coalition of groups, spearheaded by The Christian Institute, CARE (Christian Action Research and Education), TYMES Trust and the Family Education Trust. 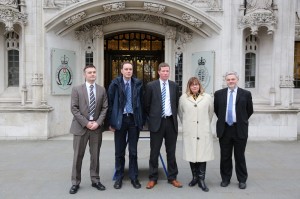 Clan Childlaw, a charity providing free legal advice to young people in Scotland, is intervening in support of the legal action.

Last year, judges from Scotland’s highest court ruled that the Named Person legislation did not conflict with human rights or data protection laws.

But NO2NP say Holyrood has exceeded its powers and breached European rules on data protection.

Before the hearing NO2NP spokesman Simon Calvert said: “We do not believe that the Scottish judges engaged properly with the arguments we put forward and that’s why we are going to the Supreme Court. There are massive issues at stake. This profoundly invasive and deeply unpopular law cannot be allowed to stand.”

The hearing will continue tomorrow at 10:30am and can be watched live on the Supreme Court website.