Taxi drivers recruited under GIRFEC to spy on children

A child protection training officer has been caught disclosing that taxi drivers are under a legal duty to spy on child passengers and report information to Named Persons.

Speaking during a GIRFEC (Getting It Right For Every Child) training day for voluntary sector workers, Scottish Borders Child Protection Committee’s Training and Development Officer Jim Terras stated, “if you’re contracted out for services to the local authority, you will have a duty, a legal duty, to assist the Named Person”.

LISTEN TO THE RECORDING OF JIM TERRAS

Local authorities have been known to give contracts to taxi drivers to transport children to school. Terras, a former police officer, revealed that 600 taxi drivers had been contracted by the Scottish Borders Council and were therefore under the GIRFEC system.

He said: “Now you can imagine the conversations I’ve been having whilst I’ve been doing taxi driver training. Right? Because we have over 600 taxi drivers… are contracted to the Scottish Borders Council to transport young children, adults at risk of harm, to various places.

“And I have to explain to them that if they’re covered by the GIRFEC system… they as taxi drivers also have a duty to tell us what’s been happening, and this idea of, you know, ‘what happens in the taxi, stays in the taxi’ doesn’t exist any more… you’ve got to tell us, because it’s a legal duty.”

Terras continued: “We’ve got taxi drivers that I’ve spoken to who are contracted to the Scottish Borders Council, they say, ‘oh, it’s not our job’, and now we’re saying, ‘well it is, now, if you’ve got a contract for the council’.

“If a child tells you something in the actual front seat of the car or behind you, that this happened last night and all the rest of it, and you’re concerned about it etc, and then I went on to ask, ‘What happens if that happens? What do you do? Where do you go?’ And a lot of them didn’t think to get out of the car at the school and go in and speak to the teachers. I had to explain to them that that was the step that they should take.

“It’s quite interesting how this is affecting lots and lots of different organisations where you’re effectively having to explain to them that passing on information and the duty to assist the Named Person means that you will have to know about – it’s quite clear that you can pass on this information.”

A NO2NP spokesman raised concerns about “Big Brother bureaucrats recruiting a network of spies to snoop on families”.

He commented: “This is not about reporting abuse or neglect; it’s about passing on information to the state about the day-to-day happiness of young people.

“And woe betide them if they fail in this Stasi-like duty.” 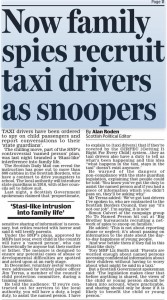