Utopia: “an imagined place or state of things in which everything is perfect.”

You would perhaps expect to see ‘utopian’ ideals populating the pages of fiction, but not perhaps on the floor of the Holyrood chamber or in front of a Parliamentary Committee. But when it comes to the Named Person scheme, the normal rules don’t apply.

Highland Council is often wheeled out by proponents of the Named Person scheme as Scotland’s utopian ideal. It’s frequently used as ‘evidence’ of the scheme’s success, and the reason for a nationwide roll-out. And this time it was Deputy First Minister John Swinney’s turn to spin the wheel.

In front of not only the Holyrood chamber but again in the Education and Skills committee, Mr Swinney confidently stated some impressive sounding stats about a drop in referrals to the Children’s Reporter in Highland.

But as the saying goes… the devil’s in the detail. 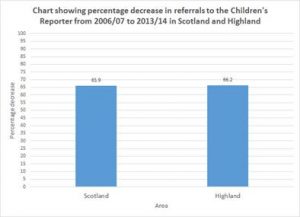 You may be surprised to learn that Mr Swinney’s stats did not paint the whole picture.

What he didn’t tell you was that in the same time period there was a drop in referrals across Scotland. In fact many local authorities which did not have a Named Person pilot scheme saw an even higher percentage drop in referrals.

Highland was not even close to being an isolated case study. 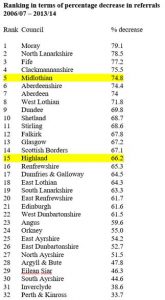 Highland’s figures were only mid-range in comparison to the rest of Scotland.

There is therefore no evidence to suggest a link to the Named Person pilot scheme.

It’s time to wake up from the utopian dream and face reality: Highland is not the model and inspiration for the national Named Person scheme that Mr Swinney and others would like us to believe.