Dr Stuart Waiton: Sinister law that will chill the blood of EVERY family

From the sun on their backs and how often they smile to the state of family finances, your child will soon be scrutinised on 529 ‘risk and wellbeing’ indicators. And it’s all down to the SNP’s grotesquely intrusive Named Person Act…

About ten years ago I started writing a dystopian novel about a future world where everyone, from birth, was given a state-appointed ‘support worker’ to monitor their development. Now I find, with the creation of the Named Person in Scotland, I no longer need to imagine this scenario. By August, it will be a reality.

By then, every headteacher in our schools will become a Named Person. And every health visitor will likewise become a Named Person, visiting new mothers and fathers eight times in their child’s first year alone, to assess not only the health of the baby but the ‘healthiness’ of you as a parent and considering your financial situation.

Every professional who has any dealings with a child, or with an adult who has children, will be trained to inform the Named Person if they have any ‘concerns’.

But these are not concerns about a serious risk of neglect or abuse. These are concerns about ‘wellbeing’ – one of the most flexible and loose concepts imaginable, a definition so wide-ranging that it is possible to imagine state investigations of families based on almost anything.

From the sun on their backs to the food they eat, the new technologies they indulge in and especially their relationships with family and friends, almost every aspect of a child’s life is being re-imagined as a ‘risk’.

Instead of at-risk children being a small minority, the presumption – say critics – is that all children are at risk.

Parents themselves are increasingly regarded as one of the biggest risks to their own children, struggling as they are with what the architects of the Named Person scheme regard as the near-impossible burden of being a parent.

The training of professionals involved with the new system will include a working knowledge of the 221 risk indicators and the 308-long list of wellbeing indicators, which include questions about whether or not a child ‘smiles a lot’; does the child have a ‘good relationship with the family’ and do they ‘receive regular praise and encouragement’.

Bob Fraser, a health adviser working with a forerunner of the Named Person scheme, suggested that a lack of hope, love, or spirituality, provided by parents could – and perhaps should – be the basis for action.

This, he noted, would mean intervening with children who are ‘not just the usual suspects, not just for those we identify as those in need’.

Other attempts to explain to parents what the Named Person is all about ask questions such as: ‘Does the child get a say in things such as how their room is decorated and what they watch on TV?’

This is a fundamental change in the way children are considered by the state, one with profound implications for the family unit. The state’s remit will now extend beyond our front doors and into the very heart of the family, scrutinising the relationship between parent and child and intervening if it does not like what it sees.

Sharing information about you and your child is enshrined in the system. Concerns, no matter how apparently trivial, must be passed on and this imperative to share over-rides normal barriers of confidentiality. The driver for all this is a pivotal shift in the way we think.

For the sociologist Frank Furedi, what we are witnessing in British – and to some extent in Western – society is the emergence of an exaggerated ‘ risk consciousness’. This is most intense when children are involved.

Writer on parenting cultures Dr Jan Macvarish, of the University of Kent, argues that this risk consciousness surrounding children has been further assisted by the expanding category of ‘abuse’ and ‘neglect’.

‘Behaviour which would once have been regarded as within the range of family experiences, such as children becoming overweight or parents getting angry and using moderate chastisement, is now categorised with reference to ideas of risk, abuse or neglect.’

This expanding category of abuse can be seen clearly in relation to emotional issues, where tensions and difficulties are being recategorised as forms of abuse.

This has led to calls for a ‘Cinderella Law’ to punish parents regarded as inflicting emotional harm on their children.

Dr Ellie Lee, also from the University of Kent, is an important critic of our growing parenting industry.

She says the tendency to view the world and our experiences through the prism of risk has meant the idea of the ‘child at risk’, which once related to a very specific group of children, has become a category increasingly applied to all children.

So for many people, this new state guardian is seen as a menace, an authoritarian reflection of the expanding nanny state.

However, for those in favour, the Named Person is simply about providing better services and support to parents and children alike.

The point is, what it means to provide ‘services and support’ to parents and children means something very different from what it used to.

Author Professor Nigel Parton, an expert in social work services, has observed that over the past two decades the state and state professionals have changed their focus and understanding when dealing with children.

We are no longer talking about a child any more, he explains. Rather, we are now always considering the ‘at-risk child’.

The message to professionals has been clear: ‘Yes, we know you’re here to teach children or to heal them or to help the family access services. But in your line of duty, first of all you must understand that you must be safeguarding children.’ You must, first and foremost, ensure that every child is safe.

At one level this appears reasonable. Who wouldn’t be interested in a child’s safety?

The important point is to understand the significance of making safety the No.1 priority and of turning all professionals who deal with children into ‘safeguarders’ in a climate in which every aspect of a child’s upbringing presents a risk.

This expanding concern about risks within childcare professionals is that the risk management of children has become a political priority.

This has been assisted by the change in politics. Rather than conviction politics dealing with big ideas, we have moved towards a micro-managerial approach that shifts the focus of state attention away from big issues and ideas onto the minutiae of everyday life.

There is a tendency to understand social problems, and their solutions, entirely in terms of individual behaviour.

One example of this is the way it has become commonplace for our leaders to increasingly represent parenting as the ‘single most important cause of impaired life chances, outstripping any other factor’, as Dr Lee argues.

So children today are more likely to be looked at as being ‘at risk’ by our safeguarding professionals and what is understood to be a risk is expanding all the time.

Add in micro-managerial politicians increasingly concerned with the risk management of children’s lives and the outcome, Professor Parton argues, i s that the state becomes obsessed with prevention. Preventing harm becomes the default position of all ‘rightthinking’ modern governments.

This is one of the reasons David Cameron has argued that all parents should have parenting classes.

The importance of the family as a private institution where people take full responsibility for their children and where individuals learn what it means to be responsible is lost within this scenario.

The family, once a no-go area for government and professional involvement, disappears or is diminished. With the Named Person we see these trends being played out in a more extreme form. The role of the Named Person is to oversee the ‘wellbeing’ of all children, to share information with other prof essionals who must be trained to understand their role in overseeing their wellbeing.

Information sharing and potential intervention in a child and family’s life will be based on ‘wellbeing concerns’.

This is a major change from the previous benchmark for intervention based on evidence of ‘significant risk of harm’. The bar has been substantially lowered to allow and even encourage professionals of all descriptions to investigate, or share information about, families.

The whole basis of the Named Person is predicated upon the understanding that ‘information on less critical concerns about a child’s wellbeing must be shared’.

Health visitors who act as a Named Person, say official guidelines, must share information to support or safeguard a child’s wellbeing. They are obliged to pass on any and every issue, ‘even where there is a duty of confidentiality’. The watchword here is intervention.

The consultation document discussing the new Named Person Bill explained: ‘ We must intervene earlier to stop major problems developing in the future.’

This necessitates that professionals get involved in issues and areas of life previously understood to be beyond their remit.

For the Named Person to be effective, they must intervene in more minor issues more often.

Some believe teachers, for instance, won’t have time to do this – but if they do not, it contravenes their duties as a listed, legal Named Person.

The Scottish Government is not lying when it says the Named Person is about services and support for children and parents.

It is simply that the child they see is presumed to be a ‘child at risk’ and the ‘responsible’ parent is a risk manager who recognises the need – indeed ‘aspires’ – to have professional support.

Support and services are less about things we want and more about the responsible, riskaverse attitudes and behaviours the Government believes we should have.

And if you think safety nets are in place to make sure you don’t fall foul of a mistake or malicious report, think again.

Scottish Public Services Ombudsman Jim Martin has written to ministers to say the system f or complaints by unhappy parents is ‘ outdated and out of step with modern complaint handling’.

Our rights are being transformed from the right of privacy and autonomy to a right to receive support and surveillance from experts and risk managers to help us with the apparently impossible task of being a parent.

Stuart Waiton is senior lecturer in sociology and criminology at Abertay University. 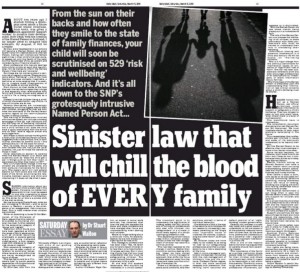 Read more by Dr Stuart Waiton:
Third Way Parenting and the Creation of the “Named Person” in Scotland: The End of Family Privacy and Autonomy?
SAGE OPEN, 26 February 2016